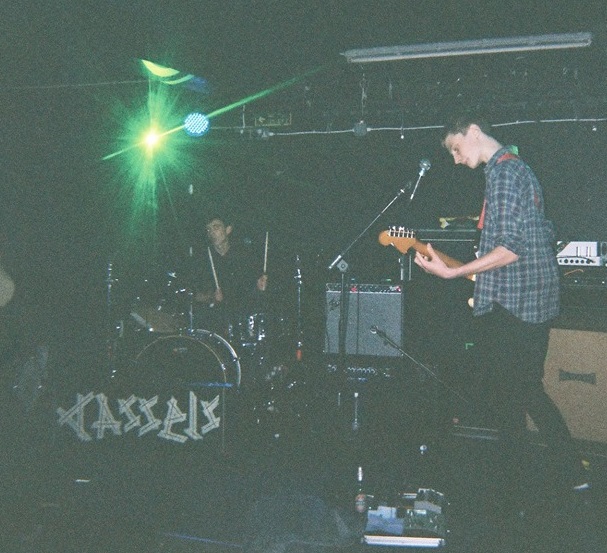 “A fuzz-banger…some might call it garage, some slacker rock, but ultimately the song signifies the beginning of a very promising act already ahead of the curve” My Old Kentucky Blog

Seasick is the debut single from Cassels – a two-piece comprised of two brothers, Jim and Loz Beck (twenty and sixteen years old respectively). Originally from Chipping Norton in West Oxfordshire, UK – now infamous for ‘The Chipping Norton Set’, the ‘trash bros’ formed out of a boredom and frustration born from their small town surroundings. With only fields for company the boys wound-up playing music together in their bedroom as loud as they pleased.

Jim (vocals, guitar) got his first guitar at 12; Loz (drums) his first kit at 8. They have gone through various extra members and names, but settled on a slimmed down band, named after the psychiatric institution ‘The Cassel’. After two years spent writing, rehearsing and sporadically playing gigs, when Jim left school after completing his A-Levels, he went against the advice of family and teachers and moved to London to take Cassels as far as he could. Since then the brothers have set-up base in the capital (with Jim working on minimum wage in an estate agents to fund the band). Jim also leads DIY collective Camp Bassein, playing in all groups: Flotsam Jets, Go Home, Two Dog Night and Cassels.

Cassels sound is now equal parts stripped back garage rock, dark, heavy distortion and sometimes stadium sized rock riffs. What sets them apart from their noisy two-piece counterparts is their lyrical content. Often dark and brooding, themes of isolation, boredom and a hatred of materialism and greed arise; not something you’d generally associate with your standard sixteen and twenty year olds. They’re not just another fucking noisy two-piece.
Seasick-

Seasick provides a composition highlighting the musical abilities these brothers hold. Cassels create abrasive and compelling orchestrations. Cassels are bursting with potential and are a name you will hear a lot more of and here at Circuit Sweet we urge you to indulge in their music. The fact that the band are creating and producing something this intelligent at such a young age means there’s even more incredible releases still ahead for the two and we look forward to sharing this.

For fans of Caddywhompas, Absalom Absalom- this is a two piece you need in your life.