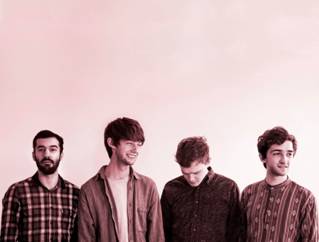 Brighton four-piece Lion Bark have premiered a new song, ‘Longhorns’, in conjunction with a hometown gig at The Hope on December 4. ‘Longhorns’ is twinned with the band’s acclaimed debut track, ‘Two Prongs’, ahead of an EP of new material early next year.

Having originally met at music school in Brighton, Lion Bark’s four members all decided to drop out before the end of their first year, after realizing they had already formed the band each of them had dreamt of creating when they first started college. They moved into a flat overlooking the sea, taking up a variety of part-time jobs (one member is a postman, the others work in cafes and call-centres) to allow them to finesse their sound.

Lion Bark have already pricked up the ears of the BBC Introducing team and a host of blogs this year, and will announce further plans for ‘Longhorns’ ahead of their date at The Hope on December 4.