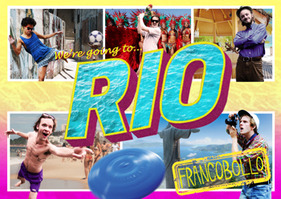 FRANCOBOLLO
NEW SINGLE ‘WE’RE GOING TO… RIO’ OUT ON NOVEMBER 25TH ON MOONSHINER RECORDS
DOWNLOAD IT FOR FREE NOW!

Adventuring their way across Europe these southbound Swedes now call Finsbury Park, London their spiritual home. After releasing two EPs and a couple of great self-produced videos (Basketball and  I Found a Bike Today) and after being picked up on the radio by the likes of Tom Robinson, Huw Stephens and John Kennedy, Francobollo are now busy getting a series of new singles ready, which they are planning to release over next few months.

The first single is  ‘We’re Going to… Rio‘, which has been chosen as John Kennedy’s Hot Pick on XFM last week and is released on Francobollo’s own label Moonshiner Records on November 25th.

Francobollo will be celebrating the release of the single with a show at Lock Tavern, London on Saturday 23rd November and by giving the track away for FREE!

And here is ‘We’re Going to… Rio’ video:

Conceived and directed by Francobollo’s bassist Sam Bailey and Strong Asian Mothers’ Amer Chadha-Patel, their new video is again completly DIY  and made on a shoestring budget with the help of artists and friends.
Catch Francobollo live