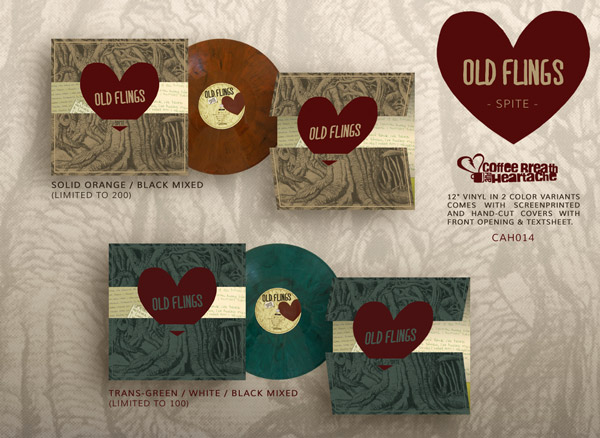 After the original release of the record in the US in 2012 (Bitter Melody / Self Aware Records) and slowly becoming one of the best kept secrets in the underground music scene, now there`ll be a european version of the record with completely reworked layout and screenprinted covers with cut-outs; limited to 300 copies on colored vinyl.

The whole record is already available for (pay-what-you-want) download or streaming on Bandcamp!

Here is some more information about the band in their own words:
Old Flings began in the Fall of 2010 as a way for Matt Evans (Just Die!, Megahurtz) to inject electricity into acoustic songs he had been writing for the past year. Consistently, Old Flings has remained the songwriting collaboration of Matt Evans and Jordan Luff.

We released a split cassette tape with Evans’ acoustic “Senseless EP” on Side A and the six-song Old Flings demo on Side B through Self Aware Records in May 2011. The demo was re-released on CD via Self Aware and Bitter Melody Records in November. In May 2012, the band began recording their first full-length, “Spite”, which was pressed on 12″ vinyl and released in October 2012 through another joint effort between Self Aware and Bitter Melody.

Touring and writing music are our primary goals and we have no plans to slow down. More than anything though, we want to inject honesty and passion into the lives of the people we meet and share our music with. We hope you sense that in our songs and in our lives. Thank you!

“The songs are filled with the kind of melody and hooks that can summon up strong emotions and become anthems. Fans of Samiam, Gameface, Hot Water Music, CIV, Hum, Jawbreaker, and Black Train Jack need to get a copy of ‘Spite’, I think youíll love what you hear.” – Dave Brown, Oklahoma Lefty (Nov 23, 2012)