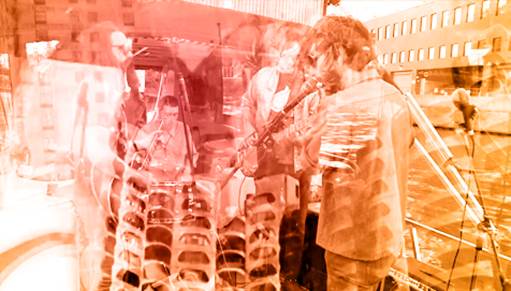 GET ON BOARD WITH CAVE AND CATCH THEIR DRIFT;
WATCH FOOTAGE LIVE ON THE CHICAGO RIVER
CAVE just wrapped up the last leg of their USA tour, and Threace continues to roll downstream. The dudes have expanded and extrapolated their jams to dizzying degrees of freakishness while out there in the wild chitlin’ wilderness, spreading their love while lost all across America. Travel wasn’t limited to van, however; like a super-sonic hovercraft, CAVE are adept at taking their funk-fusion rock show into both air and water! Expanding upon their penchant for guerrilla-style album-announcement tactics first witnessed with the release of Neverendless back in 2011 (truck-style through the streets of Chicago), CAVE took their live experience to the liquid surface of the Chicago River to get the Threace balls rolling! Unless you’re a resident Shikaakwan, you likely missed this. But documentation lets us all relive reality as we see fit, and our collective reality wants to witness CAVE jamming on a party boat surrounded by a metropolis!
Cool, green and dormant for decades, the river was reignited by CAVE’s scorching vibes, to the befuddlement and wonder of high-rise occupants, low-brow tour-boat passengers, upscale diners, and bridge-walking passers-by. Prime movers of their generation, CAVE now set coordinates for new horizons and hemispheres; New Zealand and Australia for the first time (for run down of dates check out the Drag City website). Between now and then, tie one over with the casual absurdity of CAVE paddling through “Shikaakwa” and “Silver Headband” from Threace while they drift down the Chicago River…

WATCH “SILVER HEADBAND” (LIVE ON THE CHICAGO RIVER): http://www.youtube.com/watch?v=cafUO_rsufI
Don’t forget, you can also watch the “Shikaakwa” video: http://bit.ly/1firACA   and the Threace teaser video: http://youtu.be/qaar268H5zI
PRAISE FOR THREACE:
“On Threace, [CAVE] prove to be excellent players on a technical level, who can zero in on minute detail and keep stasis interesting. They’re not just guys with really great record collections, they’re excellent musicians.” – PITCHFORK
“Threace possesses a wholly immersive sense of itself, and a free floating kinetic energy that is out of step with most contemporary riff-based music. Its command of sonic hypnosis is all the more impressive considering its brevity. In emptying out the riff of its weight, opting instead for ambience and endurance, CAVE demonstrates just how vital the riff remains.” – THE QUIETUS

“At times, Threace feels like a postmodern vision of the history of popular music, from the funk-jazz wah-wah of Arrow’s Myth to the blazing psych-folk of Shikaakwa. Bloody marvellous, really.” – PROG MAGAZINE
“The 12-minute “Sweaty Fingers” punctuates a trance-inducing James Brown vamp with Rush-style powerchord explosions before indulging in the most intense bout of palm-muting since Oren Ambarchi’s Sagittarian Domain…The payoff comes about a third of the way in, when the spirit of Foghat makes an unexpected appearance and everything goes boogie.” – WIRE

“Keeping one leg in the land of motorik and leaving the other to flirt with jazz flutes and even don some glitzy disco flares on occasion.” – ROCK A ROLLA
“‘Shikaakwa’…is all sharp angles and deft musicianship, Can-like in its nail-on-the-head precision, its obsessive, ornamental embroidering upon its own melodies and counter-melodies. It’s so intricate that you kind of can’t help but tune everything else out while listening to it…” – THE FADER
“We get electronic funk turns, stringy, noodling guitar solos, keyboard vamps that recall but never ape Bitches Brew, sweet, air flute lines. And they all mesh together perfectly.” – POPMATTERS
“With Threace, the band has built a(nother) record capable of surprising, elating and animating listeners…” – TINY MIX TAPES

“Threace careens joyfully through a series of angular, happy-to-be-alive polyrhythms that are primal in their appeal.” – FILTER
“Threace is sprawling and calculated – a collection of parts that assemble a grand whole. CAVE is a band that jams…” – CONSEQUENCE OF SOUND