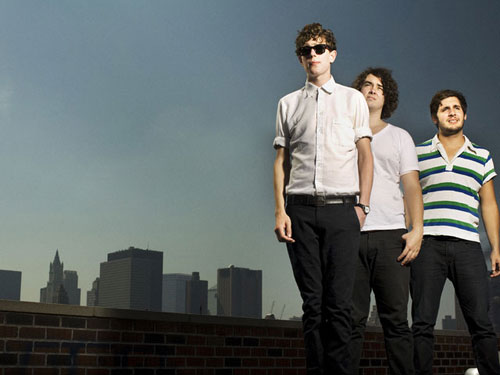 “Birthmarks never feels contrived and edges the band towards greatness” – Clash
“they have found their musical groove and are flourishing because of it.” – DIY, 8/10
“grabs listeners by the heartstrings” – Notion Magazine
“undoubtedly the Canadian group’s best effort to date” – The 405, 8/10

Ontario indie band Born Ruffians have revealed the new video for ‘Permanent Hesitation’ – a track taken from their recently released third album, Birthmarks (available here). The video features frontman Luke Lalonde throughout in a glitchy, cut-up aesthetic style that perfectly complements the song. The video was directed by Ron Eyal and Eleanor Burke using an 8-camera rig devised by Eyal, Burke, and D.P. Eric Lin. The multi-frame look of the video was inspired by artist David Hockney’s “polaroid composite” portraits which stitch together multiple snapshots into a single mosaic image. “Permanent Hesitation” is the first music video shot simultaneously with eight video cameras to create a unified image.

Birthmarks was released earlier in 2013 on Yep Roc everywhere outside of Canada, where it was released on their longtime home of Paperbag Records. The album – which Pitchfork called “their most refined work to date” following the new-found approach of co-production between Lalonde and Roger Leavens, follows on from their 2010 album Say It and is the first time that Born Ruffians have recorded material without prior rigorous road testing; allowing for fresh and more mature sounding results to come from the album sessions which took place at Canada’s Boombox Studios.