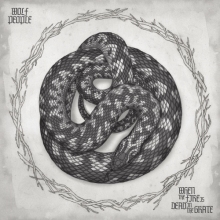 Wolf People have announced their brand new limited vinyl 12″, When the Fire is Dead in the Grate for 2nd December.  The release includes two brand new tracks – ‘Become the Ground’ and ‘All Returns Part II’ alongside, ‘When The Fire Is Dead in the Grate’ and ‘All Returns’ which have become huge fan favourites since the release of their critically acclaimed album ‘Fain’ earlier this year.
‘Become the Ground’ is a slight departure for Wolf People, featuring a much more acoustic, almost traditional folk-esque backing with the most prominent feature of a female vocalist to date. It is a thing of beauty, showcasing Jack Sharp’s knack for writing the most beguiling of melodies. ‘All Returns Part II’ was written at the same time as the ‘Fain’ album and originally intended as the full length version of the original.
Says Jack Sharp, “All Returns Part II” and “Become the Ground” were recorded in our tiny cold rehearsal studio soon after work on Fain was complete. Where the music on Fain tended to be about detail and carefully worked out arrangements, we decided to go the other way with these and just play a rough arrangement to see what stuck. The results are a bit more free than previous Wolf People outings. “All Returns” was always played in it’s full incarnation when we wrote it, but the extrapolations never made it in the final cut. It takes a rough form that we never talked about.
“Become the Ground” was a song sketched out a few years ago and recorded in it’s infancy for Steeple. The added instrumental middle section was quite carefully planned but we just kept the tape running for the ending. This is almost what we sound like when no-one else is listening.”

Stream ‘When the Fire is Dead in the Grate’ here: