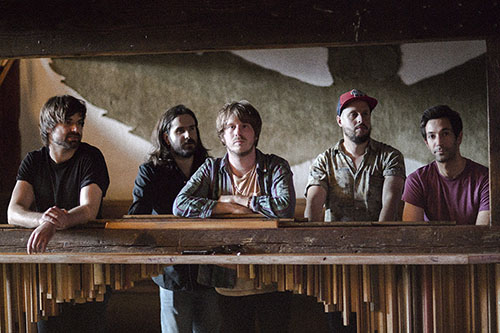 Treetop Flyers released their debut album ‘The Mountain Moves’ in late April 2013. Though based in London, the British five-piece – Reid Morrison (vocals/guitars), Sam Beer (guitar/vocals), Laurie Sherman (guitar), Mathew Starritt (bass/vocals) and the band’s lone American Tomer Danan (drums/vocals) – swapped urban England for the picturesque beaches and rolling hills of Malibu, where the album was recorded at Zuma Sound, a studio originally built for Rick Rubin. Produced by Noah Georgeson (Devendra Banhart, Joanna Newsom, Bert Jansch), The Mountain Moves is a record of hope, honesty and huge choruses. Paying their dues to everyone from The Band and Neil Young by way of Little Feat and Fleetwood Mac, there are also gracious nods towards the more contemporary likes of My Morning Jacket, The Coral and Jonathan Wilson wrapped up in this classic country-soul debut.

November 2013 sees Treetop Flyers hitting the road for a mini-tour of the UK in support of their new single Houses Are Burning (out 11 Nov).

“…effortlessly captures the spirit of late-1960s west coast pop-rock: the Byrds and Crosby, Stills, Nash & Young. British influences can be heard: there are hints of the Faces’ or the Rolling Stones’ swagger in Laurie Sherman’s classic-rock guitar licks, and sublime opener Things Will Change dips into 1980s winsome indie” ★★★★ – The Guardian

“The album is a thrill, delivering unexpected updates on its vintage influences. More soul than folk and more rock than country, The Mountain Moves is an idyllic debut from a band that has traced its own lively arc through the So-Cal ’70s.” – Paste Magazine

“Treetop Flyers are in it for the long haul.” – Mojo

“Debut album ‘The Mountain Moves’ is chock full of lush harmonies, warm arrangements and billowing acoustic guitars as fresh as a breeze looming in from San Francisco harbour” ★★★★ – Clash

Piebald’s 2004 LP ‘All Ears, All Eyes. All The Time’ and 2007’s ‘Accidental Gentleman’ To be Released on Vinyl December 10; Now Available for Pre-Order‏