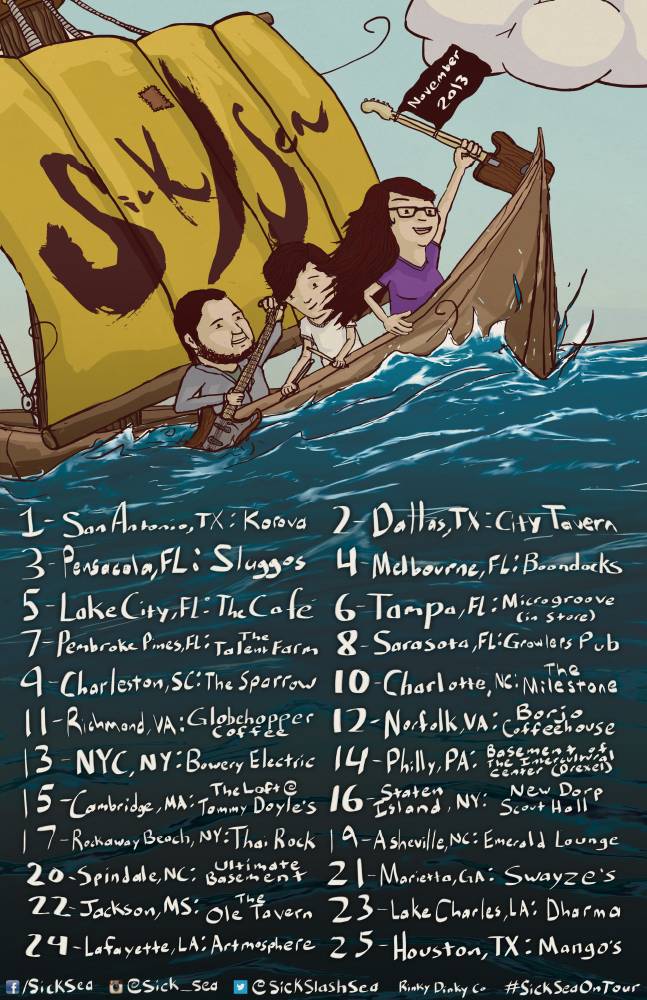 About Sick/Sea: Imagine a sequestered town at the southern brink of the Lone Star State whose townsfolk claim as much cultural heritage from the bordering country as they do from their own. A place that seems contradictory being such a small town in the largest of U.S. states. It is in this setting that the emerging band, Sick/Sea finds its roots. While their hometown might be small, the music from the Magic Valley is anything but little. The tight-knit music community found there is making waves that are flowing out past the edges of Texas, spilling into the south at large. Several critically acclaimed groups hail from the area and Sick/Sea is a part of the growing current.

The sibling-members Audrey and Cameron Scott joined together to create what might be called a ‘trend-breaking’ type of music, having fused the multi-genre sounds of their childhood into one splendid style featuring elements of Indie, Jazz, Rock and even a breath of Hardcore. Their unique songs are strung together by mellifluous, reverb-laden guitars whose dream-like tones could have easily been recorded in an echoing cave on a deserted island in that longed-for ocean from which the band’s name is derived. Cameron’s dynamically energetic drumming, combined with the succinct and jazz-like bass riffs, create a diverse and mature sound. Perhaps it is the vocals that give Sick/Sea that finishing touch which sets them apart from the rest. The lyrics are honest — every word intentional. The warm, articulate performance of Audrey Scott is easy to sing along with — a rarity when coupled with the caliber of wit present in each and every song this southern Texas band crafts together. Theirs are songs of life and love and the discernment gained through human relationship.

It is child-like adventure that brought Sick/Sea together, cherishing such works of literary fiction as Robert Louis Stevenson’s ‘Treasure Island.’ It is this same adventurous spirit that propels them forward as musicians, having completed successful tours, and plans in motion to move to the Texas music capital of Austin. Their course is set and the horizon towards which they sail looks ever brighter.