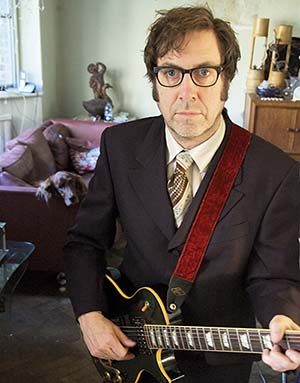 PETER BRUNTNELL ON TOUR NEXT WEEK

Peter Bruntnell returns from his Scandinavian tour next week to play a handful of UK dates. Following on from a highly successful trip to the Americana Music Festival in Nashville last month, where Peter was accompanied by a backing band in the shape of founding member of Uncle Tupelo & Son Volt drummer, Mike Heidorn and former Son Volt guitarist, Dave Boquist, Peter will be returning home to promote his critically acclaimed new Retrospective album.

“In a parallel universe, Bruntnell would be selling out O2-sized arenas… a master songsmith” – The Sun

“Showcasing why – even after twenty years – Peter Bruntnell remains as one of Britain’s finest (and most overlooked) songwriters.” The Line Of Best Fit

“In a parallel universe, Bruntnell would be selling out O2-sized arenas… a master songsmith”
★★★★ The Sun

“16 cherry-picked tracks… each one is a minor masterclass in how to make a song sound great from start to finish.”
★★★★ Irish Times

“Buy this superb set of songs to be introduced to your new favourite singer-songwriter. ”
★★★★★ Scottish Daily Express

NME claimed that “Peter Bruntnell’s records should be taught in schools” and with 9 studio albums under his belt and countless high-profile fans picked up along the way (including Rumer, REM’s Peter Buck, Scott McCaughey, Lambchop’s Kurt Wagner and Son Volt’s Jay Farrar and more recently John Murry) it’s about time one of the UK’s most consistent songwriters released a career retrospective.

It all started back in 1995 when Peter signed to Almo Sounds, where his label-mates included Gillian Welch and Garbage. He made two albums for the label: Cannibal and Camelot in Smithereens. Grammy-winning Peter Smith (Sting/Squeeze) who produced the debut Cannibal still cites it as “one of the top 3 records I’ve worked on”.

In 1999 Peter signed to Warner Brothers imprint, Slowriver/ Rykodisc and released ‘Normal For Bridgwater’. This was to be his biggest commercial success and a record that won him wider acclaim in North America. Upon hearing the album, Kathleen Edwards told her producer when recording her debut ‘Failer’ “I want to make an album like this”. Peter struck up a friendship with Son Volt, which resulted in them touring together. It also saw the introduction to Peter’s band of a 17 year-old James Walbourne. As well as playing with Peter, James tours as a member of The Pretenders.

Rather than reproduce the Americana feel of Normal For Bridgwater, Peter’s restless musical spirit has seen him strike out in new direction with almost every subsequent album. Four albums for Loose continued to win him admirers – by 2005, The Independent were calling him “one of the finest songwriters in Britain” and Richmond Fontaine’s front man Willy Vlautin called him his favourite singer.

His most recent release for Loose was 2009’s ‘Peter And The Murder Of Crows’. Filled with psychedelic drones and mellifluous tunes, the album found reviewers and fans alike comparing him with Nick Drake and John Martyn. It was one of Q magazine’s Albums Of The Year and was an Americana Album Of The Month in MOJO Magazine. Ever inventive, with his latest 2011’s ‘Black Mountain UFO’ Peter mixed West Coast harmonies with the requisite dab of psychedelia.

2013 sees the release of ‘Retrospective’, featuring tracks from all of Peter’s albums to date and crowned with a re-recorded version and video of ‘Played Out’ featuring platinum-selling Rumer.

This career spanning collection is an essential introduction to one of the UK’s most timeless and genre-defying singer songwriters who Uncut magazine describe as hugely talented in May 2013’s edition. This is far from the end: simply half time in a career many a musician would be rightfully proud of.