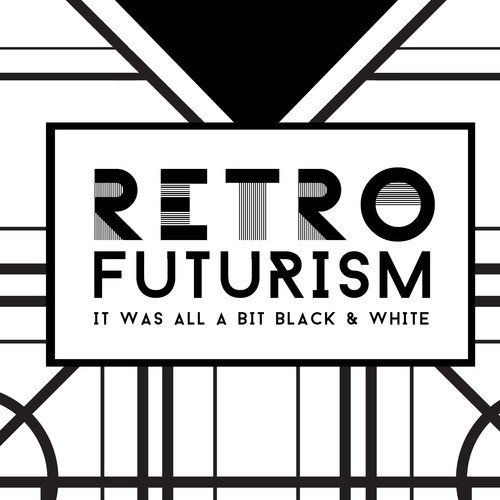 Two years ago we introduced you to the sounds of It Was All A Bit Black and White.

Time really does fly, but since our first introducing post on this act we’ve kept in touch and we’ve shared all the band related news that IWAABBAW have since endured. Such as music videos, new singles and now a triumphant masterpiece.

Consisting of Mosey on Drums and Matthew on guitar providing the loops and synth; together they are a two piece post rock experimental instrumental outfit with incredible potential. Without a doubt this potential has just been unleashed on the world. As the pair have been working hard writing and recording their debut 12 track album. October 17th Mosey and Matthew proudly unveil their new album ‘Retro Futurism’, and in doing so the duo have just unlocked more opportunities than they can imagine.

Hailing from Galway Ireland, the band have been surrounded by notorious Irish labels and fellow thriving instrumental bands since its birth in 2011, as named bands have broke out of their hometown, toured the world and seen their fanbase increase and their releases recognized. It’s now IWAABBAW’s time to find themselves alongside the likes of Adebisi Shank, Not Squares and Enemies.

Retro Futurism boasts 12 original and compelling tracks. From start to finish the record engages the listener, it projects talent, hard work and it captivates- it resonates in enjoyment. The momentum and sound that IWAABBAW creates has been truly captured and this record offers an insight into their accomplishments as musicians. This release is a stand out effort, a record that defies their genre’s boundaries.

Arzt und der Bleistift opens the record with a Russian Circles vibe, its layered and warm sounds enticing the listener for more. A few notes in, and you are hooked. An atmospheric journey from the start, delicate feedback with  alluring notes and a bright tone from Matthew joined with a somewhat intense beat thanks to the rhythmic Mosey. Together they change the dynamics of that atmosphere and from twinkling notes to a somewhat innocent riff comes ferocious stop starts, gritty bass and crashing cymbals. With a fierce change to the time signature, a sludgy feel aiding the violent yet somewhat mesmerizing hook- the track takes you for an intense ride. Going from one extreme to the next, before you know it you are back in that delicate feedback thinking what the hell just happened?! From the opening track you are left astonished.  Stickle Bricks follows this intense and edgy flow with a more upbeat approach. Retro Futurism  delivers a more meaningful and intense momentum, this said forceful fervent riffs are present throughout pushing above the lucid and consistent beats before abruptly slowing to make room for the sounds of the synth to shine through. The electronic approach is a real stand out throughout each composition and highlights a cultivated tendency for the pair. The Electric Mayhem is a prominent single on the release, with it’s disco beat and shimmering keys once again the track somewhat explodes into a cowbell jazzy key frenzy. Hard to describe but easy to fall in love with. Shock of the New is the shortest track on the record yet packs a punch offering a more abrasive and straining path. Finally All Wretch, No Vomit completes this 12 track progression with underlying feedback and belting beats fused with  driven riffs creating a compelling track which  results in a band confident to captivate with their  creative abilities and their musical liberation.

The album can pride itself on its sheer crushing effort showcasing a more mature sound and direction from the pair. Nothing short of feroucious throughout. It’s melodic, tight, embraces the modern sounds of  electronics  and offers a lasting listen. And like we said before a triumphant masterpiece.