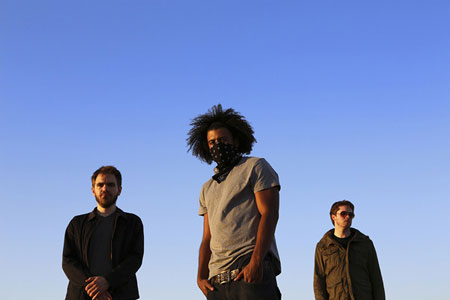 Los Angeles noiserap trio, clipping., will be making their first trip to Europe and the UK this October. Playing in support of their self-released debut ‘midcity’, audiences will also get a chance to hear some of clipping.’s new material for their two upcoming 2014 releases on Sub Pop and Deathbomb Arc. In addition, clipping. will have a tour-only 10″ available at the shows with two previously unreleased tracks, “Chain” and “Jump”.

Rather than beats, clipping. use harsh noise and musique concrète to construct their tracks. This is not an exercise in anti-music. It just is rap. A return to a philosophy popularized by Bomb Squad’s production for Public Enemy: to make music that sounds as threatening as the the environments we live in. With tracks crafted by experienced minimalist noise artist William Hutson (Rale) and film soundtrack composer Jonathan Snipes (ex-Captain Ahab), they are not only capturing this level of threat and agitation, but also the cinematic barrenness of sprawling cement, fields of litter, and endless trees with every branch chopped off and painted black. Front man Daveed Diggs is not just quick with his words, but incredibly precise. He brings out the rhythm of the seemingly rhythmless. He punctuates melodies made out of negative space. Yes, they know about noise. But this is hip hop.