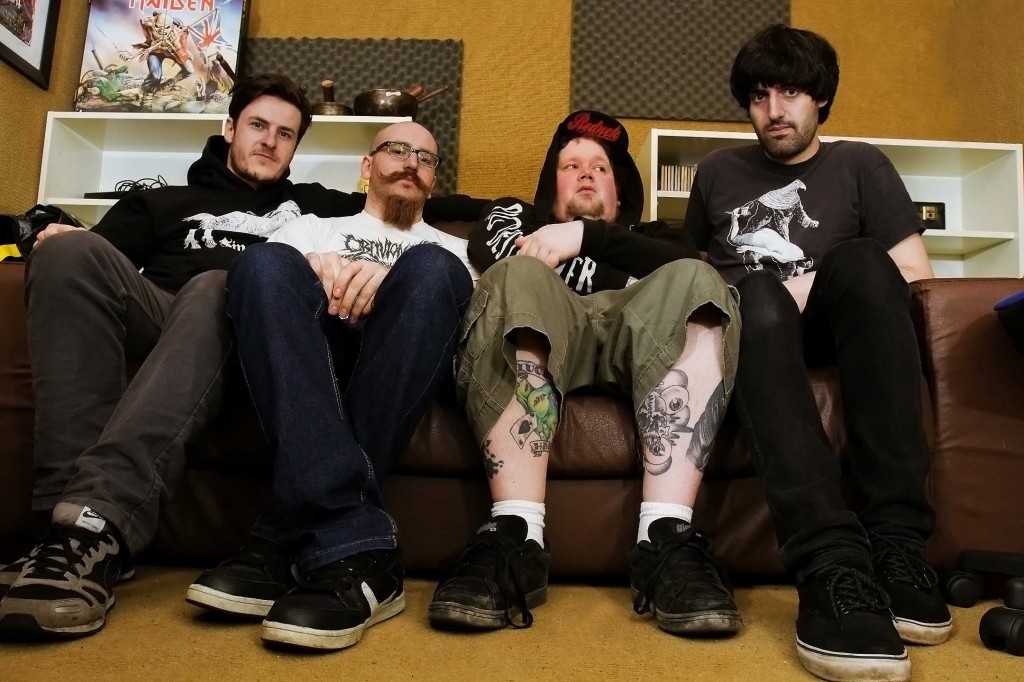 The acclaimed Whiskey Sierra sits proudly in the band’s growing catalogue, alongside their initial demo, Needle Drugs and recent EP Luciferian Deathcult. On this 7″, the unforgiving unit bear two brand new tracks and two remastered demos – which are some of the heaviest, nastiest and most extreme sounds to emerge yet – raising much anticipation for the full length that is rumoured to be coming next year.In a short space of time, Corrupt Moral Altar have become a tighter, more coherent unit and more dynamic – hardly surprising given their credentials and dedication. Chris Reese’ vocal assault barks, shrieks and shreds, always convincingly.  Adam Clarkson dishes up sludgy and at times, groove-laden basslines that fuse with Tom Dring’s ridiculously fast blastbeats and complex drum patterns. John Cooke (Venomous Concept and formerly of Malevolent Creation) shifts, like tectonic plates from doom, grindcore, sludge and at times death metal riffing to complete their unrelenting aural battering.
“Hits so hard that, in true Nails fashion, these four songs in ten minutes almost feel like a full album.” – TERRORIZER
“Whiskey Sierra is terrifying and will leave you breathless and begging for more” – METAL HAMMER
“CMA’s super-sludgy stabs hit like a demented mutation of ENT and Iron Monkey, pitching Glen Benton’s fiendish double-demon amid commodious dog bowls of thickly slavered yap.” – RECORD COLLECTOR
“It’s antisocial music of the loud, fast and distorted variety that gives you the wonderful feeling of wanting to kick the nearest person in the throat.” – BUZZ
“…flailing, beshitted fury that melds noxious sludge gloop and malevolent grooves with blasts of demented grind.”
– COLLECTIVE ZINE
“A barrage of percussion and a squall of noise spits home the relentless vitriol on the doom thrash of ‘Politics Is A Bargain Between Beggars’, and it’s closed off with the baleful, ball-busting ‘You Don’t Have To Go To Clown College’, which is neither comical or easy on the ear. In fact, it’s 2:44 of the most savagely aggressive din you’re likely to her all year.” – WHISPERIN AND HOLLERIN
“Sludge riffs nestle in between anarchic bursts of grind and Chris Reese‘s vocals range from frighteningly angry to unhealthily angry. The title track itself veers between metal, crust and Oi! like a mad dog running through traffic.” – THIS IS NOT A SCENE