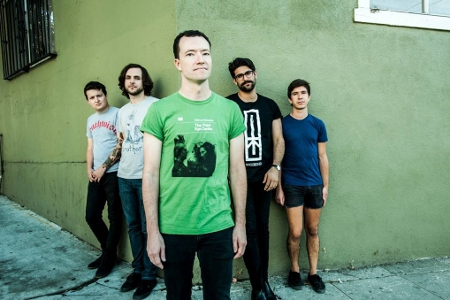 Touché Amoré’s new album IS SURVIVED BY is set for release through Deathwish on 23rd September and the band have unveiled another track from the album in the form of ‘Harbor’ which was premiered on Rolling Stone. “By using the word ‘harbor,’ the listener gets the vision of a waterscape,” frontman Jeremy Bolm tells Rolling Stone. “I like this because the song is about change, like how a change in tide can mean everything for the land surrounding. But on the other hand, the word ‘harbor’ is being used grammatically as a verb. For example, ‘to harbor the love that I have to give,’ I am keeping love sheltered and protected from the way I once was.”

With dates supporting A.F.I. in their native U.S. set to begin shortly, Touché Amoré are also excited to announce a headline run in the UK in December, having last been seen on UK shores supporting the mighty Converge. Self Defense Family and Dad Punchers will join the band as support for the tour. Jeremy says: “Really looking forward to coming back over the pond with Self Defense Family and Dad Punchers to represent our new album Is Survived By. This will be our first time headlining a full European/UK tour in three years. Let’s hang out.”
December
04 Bristol, UK – The Fleece
05 Leeds, UK – Cockpit 2
06 Brighton, UK – Audio
07 Norwich, UK – Waterfront Studio
08 Nottingham, UK – Rock City Basement
10 Glasgow, UK – Stereo
11 London, UK – Underworld
12 Manchester, UK – Roadhouse

Praise for Is Surivived By:

“… their most frantic, panicked, passionate and best album of their career” – Alternative Press (5/5)

“…carrying the rare ability to resonate with people’s lives in truly profound ways.” – The Skinny (4/5)

“Exploring new realms – both musically and lyrically” – This Is Fake DIY