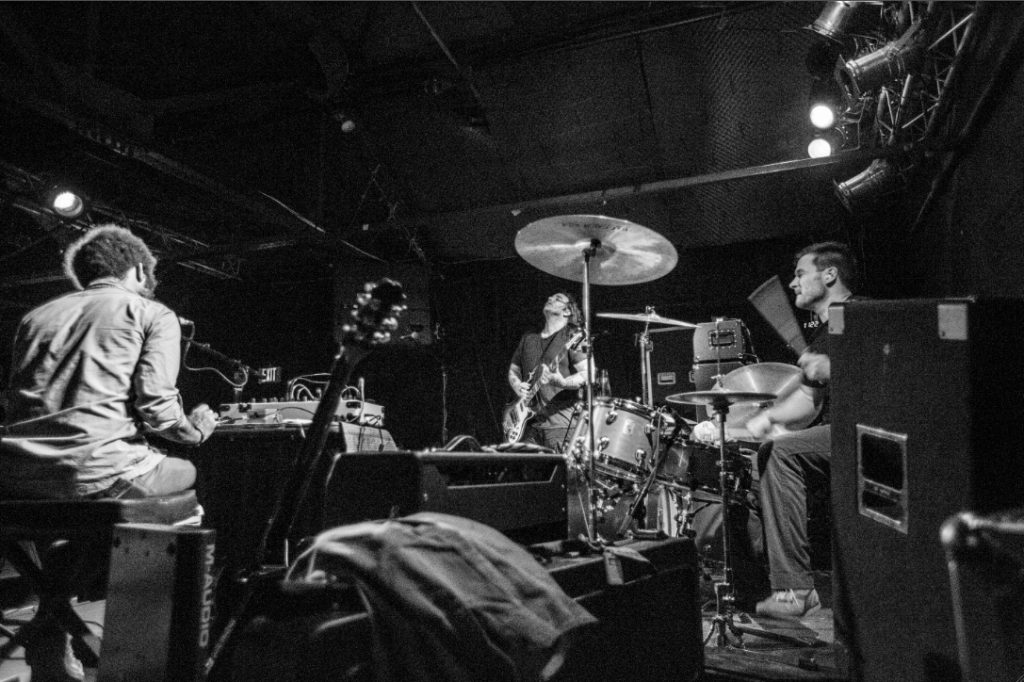 “This is a heady, sun-baked brew that marries, a widescreen perspective to a meditational core with hearteningly transcendental results.” TERRORIZER – 4/5
“Om’s teachings have always been less about finding a goal than the overwhelming richness of the journey, and, with Advaitic Songs that journey is more glorious and all-consuming than ever before.” BBC MUSIC
“While Al Cisneros’ serpentine bass lines are present and correct, this is a record characterised by vast swathes of celestial synth, pungent strings and eerie vocal incantations. That these additional elements…are so seamlessly integrated is the to duo’s credit.” ROCKSOUND – 9/10
“It’s a subtle and meaningful album…It’s part of an ongoing reflection on humanity and spirituality, and few bands do that so well.” QUIETUS
“Brain-rinsingly psychedelic” NME
“Staggering album. Bass, drums and Al Cisneros’ intonated vocals now blend with hypnotic cello, glossolalic tabla and Vedic chant to make something it feels almost blasphemic to describe simply as ‘riffs’. These tracks are fragmentary facets of the true ur-music, the supreme truth of haqq al-Yaqin, and they linger like the kiss of eternity.” ZERO TOLERANCE
“Despite moments of crushing heaviness like State of Non-Return, it’s a multi-dimensional experience that refuses to be pinned down…Advaitic Songs was made for playing through headphones, and for drifting off to far-away lands.” PROG
“The band’s most interesting and engaging work yet.” METAL HAMMER
“Emil Amos and Al Cisneros’ partnership is now watertight. Amos’ light-handed taps and rolls framing his cohort’s slack, sensual grooves with room to spare but where there used to be a lake of pounding fuzz to fill the gaps is now a little bit of everything, low cello drones and the sharp rattle of the tabla frequently joining the fray…it has allowed Om to finally reach that plateau of rhythmic, stoned bliss they’d always searched for.” ROCK A ROLLA
“While their previous  album, God Is Good, fell some way short of transcendental, Advaitic Songs sees Cisnero putting his money where his mantra is. State of No Return may be a familiar blast of bass-heavy sludge, but the rest of the album is a hugely seductive mix of droning strings, tablas, chants and melodies (both eastern and western) woven together in a hazy melange of rock at its most languorous.” GUARDIAN
Rejoice! Om‘s interplanetary trajectory has aligned with ours, and they’re heading our way… The coordinates have been keyed in, the destination of Europe in sight, all ready for a November touchdown amid jets of synth, thrusts of earth-disturbing bass and clouds of alluring alien gases. Celebrate and prepare, for the trio of Al Cisneros, Emil Amos and Robert Lowe are a force to be reckoned with and relinquished to.
TOUR DATES
14/11/2013, Berlin, Volksbuhne
15/11/2013, Copenhagen, Loppen
16/11/2013, Stockholm, Kagelbanan
18/11/2013, Gothenburg, Truckstop Alaska
19/11/2013, Hamburg, Hafenklang
20/11/2013, Siegen, Vortex Club
21/11/2013, Geneva, l’Usine
22/11/2013, Bern, Dampfzentrale
24/11/2013, Paris, BBmix Festival
25/11/2013, London, Village Underground
26/11/2013, Birmingham, Rainbow Warehouse
28/11/2013, Leeds, Brudenell Social Club
29/11/2013, Camber Sands, ATP festival
30/11/2013, Kortrijk, Sonic City
01/12/2013, Utrecht, Le Guess Who
Om’s latest album is one which roars so loud it can’t be ignored. Advaitic Songs maintains the singularity of purpose that informs the core sound of OM, yet every element reaches further than before. Whatever drone-doom genre that had been hoisted on the duo in years past has been decimated by the sheer imagination, expansive quality, and meticulously detailed arrangements of Advaitic Songs. For a band that has continually followed its own course, and stood alone in its sound and approach, Advaitic Songs for certain, is the band’s most focused, progressive document.