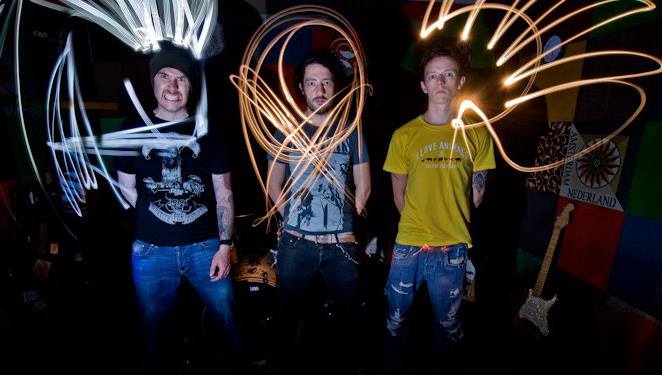 ‘Kill Chaos are a demonstration of either sheer will or sheer stupidity’ Darren Clewes, singer/guitarist

Kill Chaos are a 3 piece alternative rock band from Nottingham/Mansfield/Sheffield. They draw influences from bands like Biffy Clyro, Reuben, Future of the Left, Hell Is For Heroes, Sucioperro.

The band sparked into life in 2007 and after the usual Spinal Tap drummer revolving door band settled into the existing line-up in late 2011, having played extensively up and down the country with bands such as Sucioperro, Arctic Monkeys, Reef, Frank Turner, INME and many many more.

The current line up of Darren Clewes (vocals/guitar), Gavin Treliving (vocals/bass) and Tom Waddingham (vocals/drums) have spend the past year-ish recording, mixing and mastering the album PromisesPromises whenever time and money allowed. The album will be released through Field Records on 18th November.

PromisesPromises reflects where the band is at live – veering wildly but somehow comfortably between dark, crushing riffs and crafted songs…all where the hook is king. The songs are all written collaboratively from individual sparks of ideas but retain a personal insight into the headspace of the band.

The band will then embark on a string of dates to support the album release, including a 6 date tour as main support to Jamie Lenman (ex Reuben). The band was handpicked for the tour by Jamie after he saw them at a show in London a couple of years ago and became a fan.

Above all, Kill Chaos are music fans. They talk endlessly about who they’d like to tour with, what producers/studios they’d like to work in, who their favourite bands are…they play music as music fans would, with commitment, passion and energy. With all of the other stuff that surrounds their – and our – daily lives, this means the world to them.