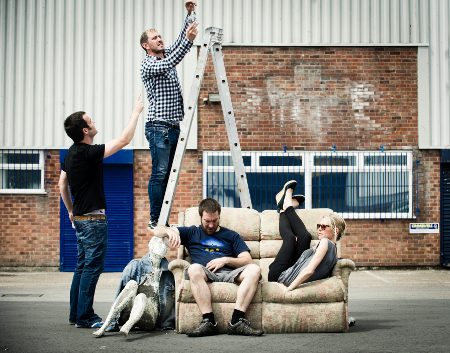 ‘Bread, Cheese, Bow and Arrow’ is the first new track to be heard from Future of the Left’s forthcoming album how to stop your brain in an accident. The track was premiered by Huw Stephen’s on BBC Radio 1 last night and can now be heard

future of the left are contractually obliged to tell you that their new album how to stop your brain in an accident will be released on 21st October 2013 through their still-pretty-damn-shiny-new own label, prescriptions.
recorded at monnow valley studios in monmouth it contains fourteen songs (nb. still not ‘tracks’) and runs to/at/on 46 minutes, all of which are completely necessary. if you are alive and even vaguely in love with the idea of rock music being more than an ersatz lifestyle choice then it is clearly their best album yet. yes, they would say that. no, it’s not open to debate. The album will be available on LP, CD and download.the album (and an accompanying mini album, ‘human death’, which was recorded at the same time containing 6 songs) will be available earlier to anybody who participated in the pledgemusic campaign for the record which began in May 2013 and reached its funding target within five hours.  See the campaign here:
http://www.pledgemusic.com/projects/futureoftheleft

future of the left have  announced a UK tour in November in support of the album.