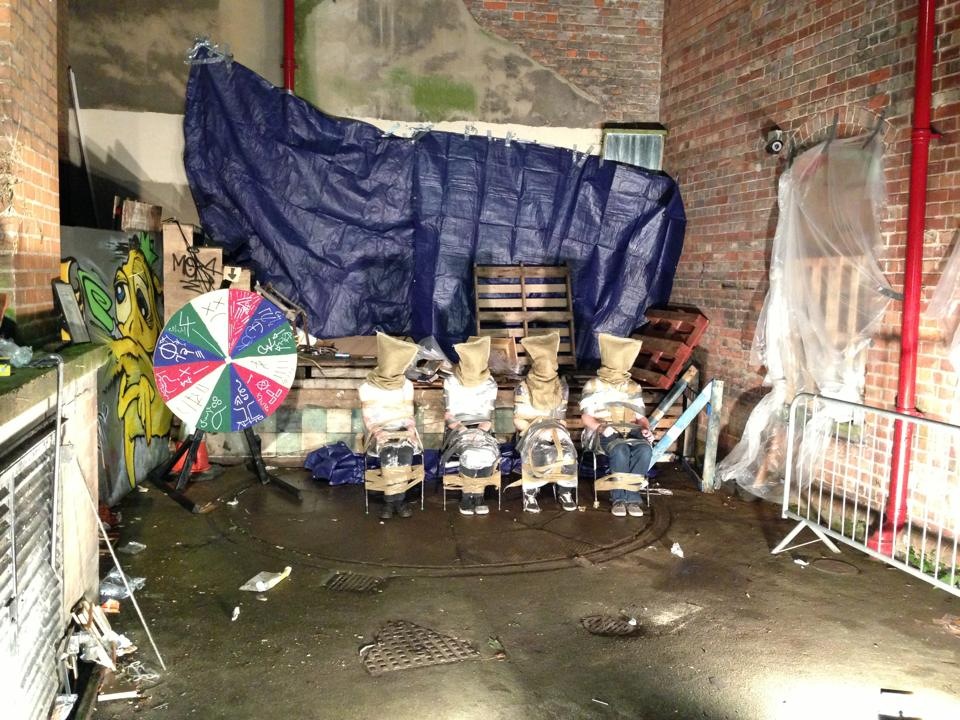 Baby Godzilla have confirmed the release of their next single on 28th of October through Venn Records. Released on translucent-blood wax 7-inch vinyl, explosive A-side ‘Don’t Touch That Dial’ will be backed by B-side ‘Pig’ and limited to only 500 copies. Signed by Gallows duo and Venn honchos, Stuart Gili-Ross and Laurent Barnard, Baby Godzilla are about to push their nerve even further this winter and cannot wait to get out on the road to tour the UK in October.

“Baby Godzilla are maniacs,” says Barnard. “Ever since we saw their ‘At the Oche’ video a year ago we’ve been waiting for an opportunity to release some tunes. Also be sure to catch them live, the word ‘decimation’ comes to mind!”
The video for ‘Don’t Touch That Dial’ was directed by David Louis Lankester and features all four members being tortured on a DIY game show. The band were hooded and gaffer taped to chairs, fed maggots, doused in liquids and rancid food waste, hit with golf balls, whipped and then sprayed from 3 metres with uzis carrying paintballs. Baby Godzilla can guarantee that no animals were hurt in the filming of this carnage, but all four band members took the biggest beating of their lives.
Vocalist Matt ‘Butch’ Reynolds has stated that ‘Don’t Touch That Dial’ is “a song about stupid people on the television, the really stupid people that watch them and the even more stupid people that aspire to be the stupid people that they are watching. Fucking idiots! We hate them!”
These two new tracks represent Nottingham’s Baby Godzilla at the top of their game. A band that no other can match on the live stage right now who are over-worked, under paid and guarantee to break you into tiny pieces.

Pre-order your limited edition 7” and large exclusive patch from http://www.vennrecords.com/shop/baby-godzilla/dttd/

Baby Godzilla will be annihilating audiences at the following shows. Make sure you do not miss them.