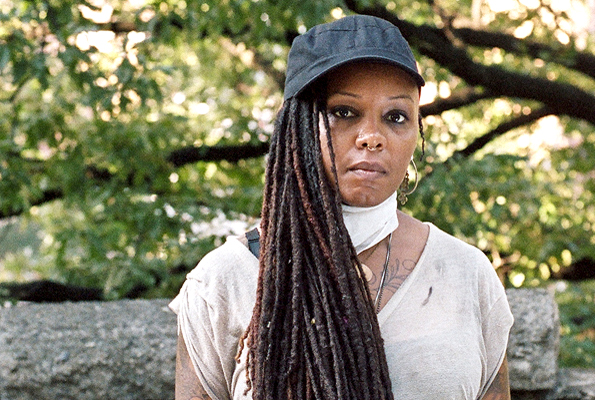 COIN COIN Chapter Two: Mississippi Moonchile is the much-anticipated new installment of Matana Roberts’ unique and forward-looking project. Guided by an aesthetic practice she has dubbed ‘panoramic sound quilting’ (partly in homage to the literal handicraft heritage of her patrilineal line), COIN COIN finds Roberts conjuring some of the most nuanced, thoughtful and substantial American liberation music of the 21st century.

COIN COIN has also been a profoundly generous and collaborative process for Roberts, who has been developing various chapters of the COIN COIN cycle with a wide range of musicians from diverse backgrounds over many years. The hugely acclaimed Chapter One: Gens de couleur libres was the culmination of two years of regular visits to Montréal and featured fifteen musicians assembled from that city’s out-jazz, experimental and avant-rock scenes. Chapter Two: Mississippi Moonchile was developed for a more intimately woven New York jazz sextet and was recorded with this group in late 2012, following several years of local and international performances of the piece with this line-up.
Mississippi Moonchile takes the next leap forward in Roberts’ iconoclastic and complex project of memory and recuperation, where historical and contemporary musical tropes, fragmentary spoken and sung narratives, and Matana’s cascading alto saxophone are supported by prodigiously talented players on piano (Shoko Nagai), trumpet (Jason Palmer), double bass (Thomson Kneeland), drums (Tomas Fujiwara) and operatic tenor voice (Jeremiah Abiah). While demarcated by 18 titles and track IDs, the album presents an uninterrupted, incantatory swirl of through-composed music, where thematic structure and free improvisation are propelled in continual and fluid co-existence.
While Chapter One was marked by more defined set pieces, stark juxtapositions, and the epic cacophony of a sprawlingly unconventional big band, Chapter Two unfolds as a cohesive album-length piece unto itself, channeling the drama and catharsis of Gens de couleur libres into something more measured and circumscribed, playing with notions of dignity, rarefaction and restraint. The inclusion of a male operatic singer contributes significantly to the tone and tension of Mississippi Moonchile in this respect, and operates as a fascinating foil to Roberts’ own voice, which alternates between splintered ‘wordspeak’ and deeply soulful singing. The six players are in a perpetual motion of coalescence and divergence, where melodic themes, occasional ostinato passages, and variously deployed literal voices (“There are some things I can’t tell you about…”) serve to rally the overriding theme of individual narratives and personal expressions as struggles with, celebrations of, and threads within collective history. The contortions of empowerment, pride, shame, suffering, eulogy, empathy, liberation and transcendence are Matana’s raw material in the broadest and most specific senses; she has given this raw material another beautiful and compelling shape in the second chapter of the COIN COIN story.
Digital and physical promo is now available so please get in touch if this is something you would like to hear. More Constellation news is incoming soon, meanwhile do let me know if you have any questions.
“Roberts is a major talent – a unique and easily identifiable saxophone voice who’s also a thoughtful composer capable of choosing empathetic and supportive collaborators.” – WIRE
“Within this short space of time her career trajectory has soared ever upwards…mightily impressive.” – JAZZWISE
“A modern exponent of the free jazz aesthetic…She makes an arresting noise – but not for the faint-hearted.” – RECORD COLLECTOR
“This utterly compelling album not only demands and deserves attention in its own right, but has serious potential to be the start of a truly masterful greater musical and cultural work.” – ROCK A ROLLA