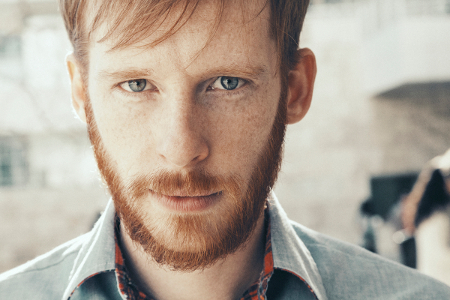 Having already announced the announced the dual release of two albums Bubblegum and Bulldozer, Brooklyn-based songwriter Kevin Devine has unveiled new track ‘For Eugene’, featuring the vocal talents of former Belle & Sebastian singer and Mark Lanegan collaborator Isobel Campbell. Taken from Bulldozer, ‘For Eugene’ was written in the aftermath of Hurricane Sandy in 2012.

Kevin says: “I wrote ‘For Eugene’ after the hurricane in response to things I saw out on Staten Island, and more specifically something I read in the New York Times about the Midland Beach area, which just got destroyed, and several residents in particular who passed away. The song blends two stories, both of which struck me as profoundly brutal and very human, into one.”

Despite the lyrical content, the track has a soothing, almost lullaby quality, further emphasised by the backing vocals lent by Isobel Campbell.  “I had been circling back to Belle & Sebastian’s ‘If You’re Feeling Sinister,’ which is one of my very favorite records of all time and I kept hearing Isobel Campbell singing “For Eugene” in that distinct voice – small and open,” says Kevin. “Chris Szczech, who co-engineered the record, is friends with Isobel. On the last day of tracking she came in to the studio for a few hours and did it. It was a truly bizarre-in-a-beautiful way moment, hearing her voice singing the song – it was exactly right. I’m thrilled she was into it.”

Bulldozer and Bubblegum were created following a hugely successful Kickstarter campaign, which saw Kevin raise more than $114,000. Bulldozer is laced with electric folk-rock and pop ballads  and was recorded with frequent collaborator Rob Schnapf (Elliott Smith, Beck, Guided By Voices). Bubblegum is a big rock record and a nod to Kevin’s early work and was produced by Brand New frontman Jesse Lacey.

Both albums will be released on October 14th through Big Scary Monsters and are available to pre-order now.

Kevin will return to the UK for a headline tour in February 2014. Tickets are available now.