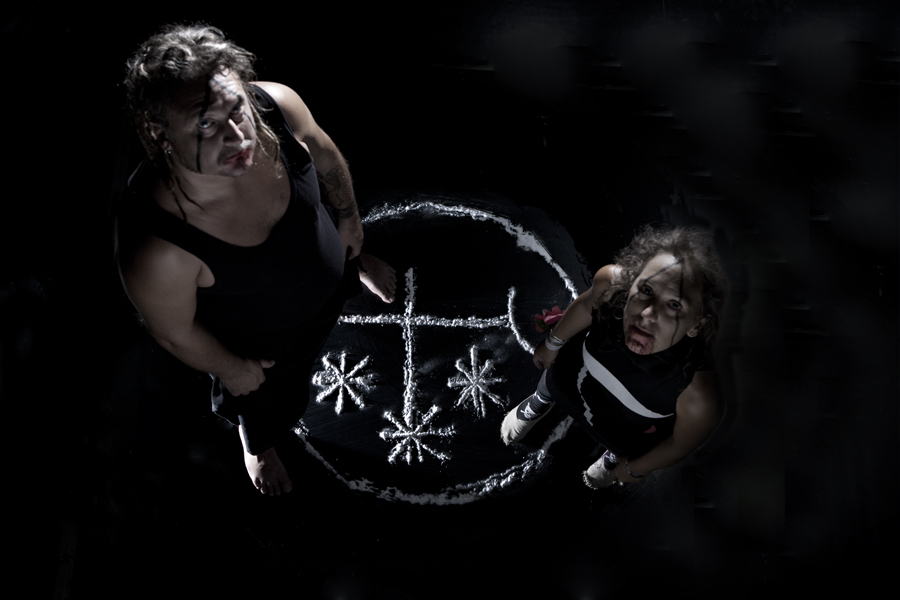 ITALIAN NOISE-WEILDING DUO OVO ANNOUNCE ‘ABISSO’, THEIR UPCOMING ALBUM ON SUPERNATURAL CAT
The genre collapsing noiseniks OvO have announced the title of their new album, Abisso, due for a November 4th release on harbourers of all things Italian and loud, Supernatual Cat. The duo (made up of Bruno Dorella playing a stripped back drumkit and Stefania Pedretti handling vocals and guitars) are entering their 13th year in existence as OvO, and are showing no signs of relenting in their experimental attack on instruments.
With a live repertoire which has seen them play everywhere from Europe to Mexico to Israel and everywhere in between, and with such acts as Nadja, KK Null, Thurston Moore, Jim O’Rourke, Rollerball, Thrones, SubArachnoidSpace, Zenigeva, Lightning Bolt, Sleepytime Gorilla Museum, Estradasphere, Steve Mc Kay, Trencher, Ludicra, Bill Horist, USA Is a Monster, White Mice, Cock ESP, Bastard Noise, Zu, Larsen, Kill Me Tomorrow, Murder Junkies, Jarboe, A Hawk and a Hacksaw, they have truly rooted themselves in the culture of crafting honed and incredibly loud dynamic noise, veering from belly-ache sludge to simmering and shimmering compositions which ooze rock’n’roll from punk stained pores.
Stay tuned for more details in the coming weeks.
“With such a small collection of instruments to abuse, OvO constantly evolve as a multi-headed beast – at times creating a clatter of apocalyptic death-thrash before veering violently into extended passages of synth-driven noise-doom. If you’re looking for the soundtrack to a murderous rampage, multi-car pile-up or nuclear meltdown, look no further. There doesn’t really exist anything else quite like this in music.” – SLEEPING SHAMAN
“From start to finish it sounds like a hellmouth opened in a recording studio, which is every bit as fascinating as that sounds.” – MTV IGGY
“Ominous basslines, crushing drumming and serpentine guitar – fascinating and terrifying.” – SITTING NOW
“Drifting in the limbo between the percussive sludge of Jucifer and the surreal assault of Fantômas.” – 4/5 THE SKINNY
“The two masked hell-raisers that make up OvO have created an album that can only be described as a discordant, schizophrenic and shockingly evil mess, albeit an extremely enjoyable one. Fuzzy lumbering bass lines, simple percussion and dirty riffs play the backing music to groans and screams that could only have materialised directly from hell’s mouth. It doesn’t get much more fucked up thanCor Cordium; the worrying thing is you’ll probably enjoy it.” – DIGITAL FIX