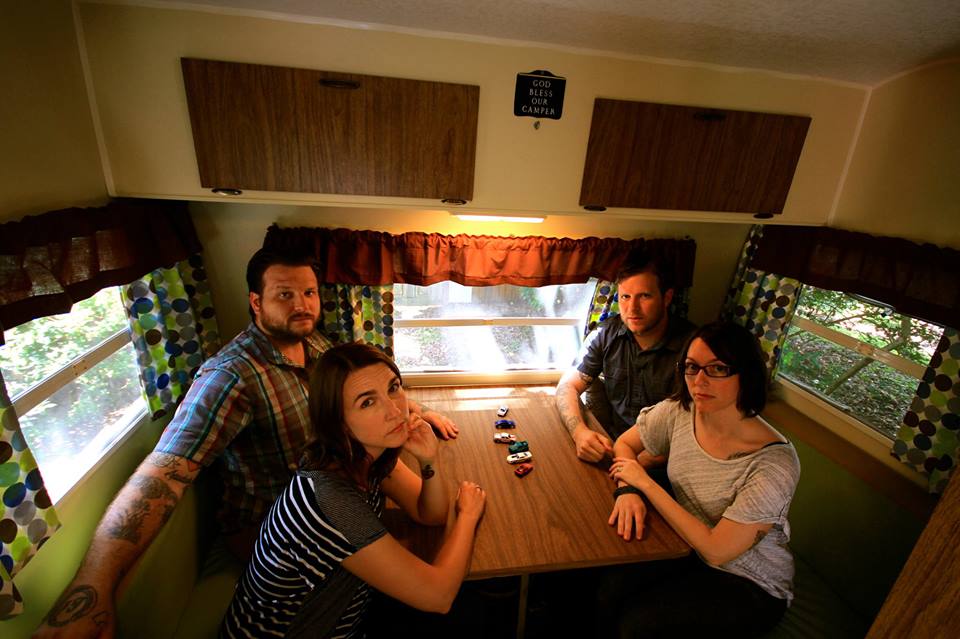 HUMAN PARTS ANNOUNCES DEBUT ALBUM AND RELEASES NEW VIDEO FOR “THE RUMBLE”
August 16, 2013 – Los Angeles, CA – Former bassist for Against Me!, Andrew Seward, has revealed his new band, Human Parts, and plans to release their debut self-titled album on September 10th.  In anticipation for the release and upcoming performance at The Fest in Gainesville, FL, Human Parts has premiered a new video for their first song, “The Rumble,” today.
Watch Human Parts new video for “The Rumble”
For the last several years Seward wrote music when he wasn’t crisscrossing the country with Against Me!  This music was for him and reflected on his experiences in life and as a father.  He had no intention of releasing any of the songs until his departure from the band allowed him to focus on the project full time.  Now at his most creative place in years, Seward is finally ready to introduce his fans to Human Parts.
Human Parts, which along with Seward consists of vocalist/wife Verite Seward, vocalist Kim Helm, guitarist Dave Kotinsley) and Andy “Pants” Schwich, began to evolve organically after Seward enlisted the help of his wife, daughter, nephew, friends and various other people from the Gainesville music community.  Recording when he could, where he could and with whom he could, he managed to craft an endearing, personal collection of songs that give a glimpse into his life.
The record manages to reference punk’s past and present while effortlessly implementing elements from other genres the same way the Dead Kennedys did with surf guitar or Subhumans did with progressive rock. “This whole process has been about not over thinking and just having fun with it,” Andrew says of his approach to the music. “It was completely liberating and it wasn’t scary at all because there wasn’t time for it to be scary. I just really wanted to get these songs out.”
From the Spaghetti Western-inspired singalong “I Work On Not Working” to the expansively arranged “Best Foot Forward,” Human Parts manages to showcase the various sides of Andrew’s musical identity without relying on writing the same song over and over. Another perfect example of this is the harmony-rich anthem “Call ‘Em Off” which evokes classic acts such as The Clash without coming off as forced or inauthentic, right down to the deceptively simple single-string guitar solo.
Lyrically Human Parts focus on everything from the way the Sewards’ dog reacts to a Thunderstorm (“The Rumble”) to how difficult it is to give new music a fair shake when adult responsibilities begin to take over (“First Impressions”). In fact, one of the standout tracks is Andrew’s bass-driven duet with Helm “Hi, Nice To Meet You” about the perils of celebrity culture. “Basically idolizing any public figure like a rockstar or movie star isn’t the smartest of moves if you ask me,” he explains of the track. “It’s about hero worship and getting creepy with it.”
Ultimately Human Parts is about Seward’s experiences as a father, friend and former band member but none of these songs are about outside influences as much as they’re a glimpse into Andrew’s own thought processes, which includes the positives as well as the insecurities. “I’ve been gone for a decade and I love being home but I’ve also been playing in bands since I was 14 so I don’t know how notto do this,” Andrew summarizes when asked what the future holds for Human Parts. “Me and my wife talk all the time about the fact that we want our kid to see that neither of us were ever afraid to do anything and this band embodies that commitment.”
Human Parts Track List:
1. First Impressions
2. I Work On Not Working
3. Now We Wake Up
4. The Rumble
5. Best Foot Forward
6. Call ’em Off
7. The Future Path In The Hasrsh Bright Light
8. Hi Nice To Meet You
9. Cliff and Eli
10. Tributary
11. Forget Delay
Human Parts Tour Dates:
Nov 1-3 – Gainesville, FL – The Fest
For More Information:
http://www.humanpartsband.com/

Unkle Bob ‘Songs For Others’ EP out now