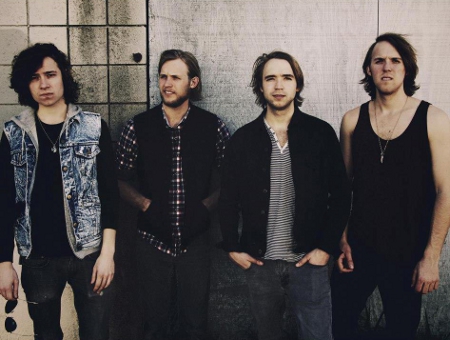 Watch the new ‘Knock Yourself Out’ video
http://youtu.be/sywrJOV21Io

Illinois’ Filligar give a taste of their explosive live performances in the new video for Hexagon album track ‘Knock Yourself Out’. Directed by Daniel Hilsinger, the video gives viewers a insight into Filligar’s touring life– from the studio, to the road, to the stage.

Filligar’s forthcoming album, Hexagon,  the bands most accomplished release to date, is released in the UK on September 23rd through Decade. The four-piece have previously unveiled album track ‘New Local’ and a video to ‘Money On The Dark Horse’ and Hexagon has already received a slew of praise from US outlets.

What Filligar lack in years, they more than make up for in drive, determination and creativity. Their prolific catalogue of original music has been recognised by the American Society of Composers, Authors, & Publishers (ASCAP) as “of prestige value,” and their previous release The Nerve was nominated for a 2012 Independent Music Award for Best Rock Album.

Filligar’s powerhouse live performance has seen them share stages with the likes of The Black Keys, Alabama Shakes and My Morning Jacket and the band will be touring the UK later this year.