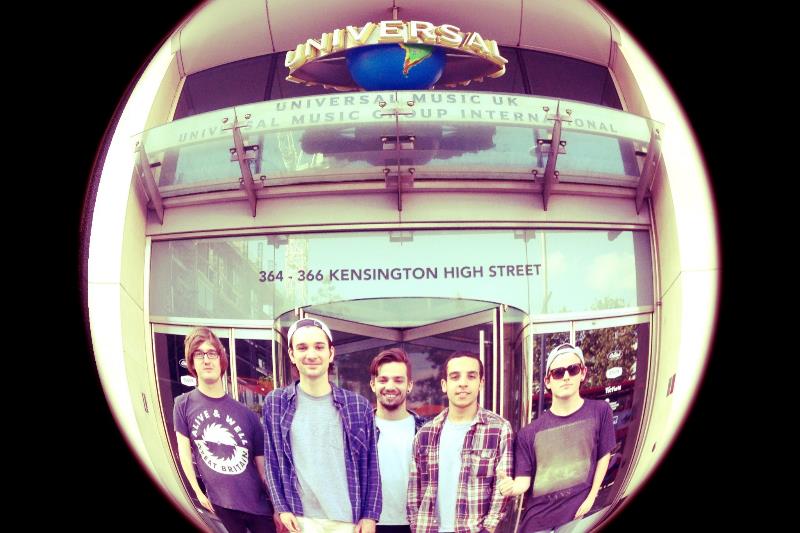 Tour with Emily’s Army from next week & Tonight Alive in Sept/Oct
Spinefarm Records are delighted to announce their latest signing to the roster – Decade, who join the roster of acts including Rammstein, KoRn and Protest The Hero amongst others. After doing it for themselves since their inception, the quintet are excited to take it to the next level with this revered label – “Signing to Spinefarm/Universal is a huge opportunity for us and a massive step up. We’re so stoked to get to work with everyone at the label and can’t wait for our existing and new fans to hear everything we’ve been working so hard on.”
Leo Nicholas (Spinefarm Records Label Manager) enthuses – “Decade have been blasting from my car, headphones and (as the office can testify) my speakers religiously since being sent their album demos earlier this year and it is always a privilege to help develop the career of such exciting, homegrown talent. 2014 will be a BIG year for Decade.”
Decade’s drive to escape dreary English suburbia fuels their unique, rampaging, and faultlessly executed brand of hooky melodic goodness. Debut EP ‘Lost At Sea’ gained a cult following with its tales of love, life, growing up and losing out set to an unforgiving guitar assault shot through with slices of suburban restlessness and the band quickly followed it with 2012’s Self Titled EP which Rock Sound awarded 8/10 and hailed as a collection of “positively enormous anthems”.
Already announced as the opening act on Tonight Alive’s autumn headline dates, Decade will be supporting Emily’s Army from next week with further live dates to be confirmed over the next few months as they work up to the release of their debut album (produced by Romesh Dodangoda) early in 2014.
Alex Sears – Vocals | Joe Marriner – Guitar  |  Connor Fathers – Guitar | Harry Norton – Bass | Dan Clarke – Drums
Emily’s Army with support from Decade
15/07/13 The Lexington – London
17/07/13 02 Academy – Liverpool
19/07/13 Hobos Live Music Venue – Bridgend
21/07/13 Coporation – Sheffield (Tramlines Festival)
24/07/13 The Cockpit – Leeds
25/07/13 Sound Control – Manchester
26/07/13 The Garage – London
Tonight Alive with support from Decade
28/9/13 Thekla – Bristol (headline)
29/9/13 The Haunt – Brighton
30/9/13 The Forum – Tunbridge Wells (headline)
01/10/13 Library, The Institute – Birmingham
02/10/13 King Tuts Wah Wah Hut – Glasgow
03/10/13 Manchester Academy 3 – Manchester
05/10/13 Red Room – Nottingham (headline)
08/10/13 02 Academy Newcastle – Newcastle Upon Tyne
09/10/13 Electric Ballroom – London
11/10/13 Cockpit – Leeds
www.spinefarmrecords.com
www.twitter.com/decadeofficial
www.facebook.com/decadeofficial