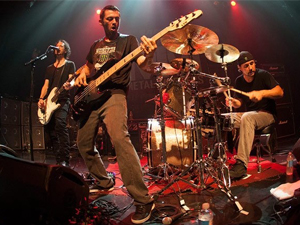 PHILM TO PERFORM ONE-OFF LONDON SHOW THIS AUGUST
Scaling his infamous drum set down to a four piece kit, reminiscent of his drumming mentors of the late 60’s, is certainly a shock to Dave Lombardo enthusiasts whom have justifiably typecast the exceptional talent to the genre he helped trail-blaze. But, the depth of his musical aptitude is much more than what has come to be known as his signature sound.  Lombardo’s prodigious skill and affinity for heavy, penetrating grooves birthed a temperamental, highly gifted child: PHILM.  A sonic experimentation that would not only impress his musical heroes of past, but is currently leveling the psychedelic/progressive rock partisans of today.
An obvious reason for this multi-genre amalgamation can be directly linked to the gentlemen that play alongside Lombardo in PHILM – bassist Pancho Tomaselli is a long- time member of funk rockers, War. Singer/guitarist Gerry Nestler fronts prog metallists, Civil Defiance.
The three innovative musicians have masterfully revived the concept of the Power Trio. Their often improvised live set can find their audience entranced by a tonal journey that is both awe-inspiring and haunting. PHILM easily satisfies the palate of the most vexed of neo-psychedelia fans.
On 7 August, PHILM will be making their debut appearance in the UK, performing a one-off show at the Garage in London (ticketing link and further info: http://www.livenation.co.uk/event/439437/philm-tickets). This will be in support of their debut album, Harmonic which Ipecac Recordings released in May 2012. About this release, Dave Lombardo comments:
“When people hear about my involvement in PHILM, they automatically assume that it will compare to Slayer’s sound,” explains Lombardo. “They couldn’t be more different. I have scaled down my drum set to a four-piece, reminiscent of the drummers from the late ’60s that influenced me. Each song is unique in itself, I like to refer to it as ‘rhythmic emotion.” It’s almost like taking all the heavy songs of the ’60s and bringing that era to a modern plateau, then blending them with the modern trance and psychedelic sounds of today.“
Dave continues…”We decided to record Harmonic in the intimate setting of a home, with various vintage recording equipment.”…”The music was written collectively in an improvisational manner, unlike the majority of recordings I’ve done before. This was very important given this is my first recording where I’m carrying the title of Producer and performer. The album achieves a dense, unholy convergence of tones and discords. We also touch on haunting, desolate, ambient sounds. Our music tends to be written in a manner where we never know the outcome until we listen back to what we recorded. A Harmonic journey.“
Check out the making of the album in this video clip: http://youtu.be/JOIMwFY4Ya4
Prepare yourself for the raw, harmonic onslaught of PHILM.
“Philm’s music is excellent, a blend of classic rock riffs and grooves, experimental textures and yes, a bit of metal.”
– RECORD COLLECTOR
“Over the course of 15 tracks, the LA power trio cover a huge amount of sonic ground, encompassing everything from turbo-charged punk rock to tripped-out psychedelia, sprawling jazz fusion to snarling. There aren’t too many musicians who could pull this off, but Lombardo clearly knew what he was doing…PHILM handle the task with aplomb.” – ROCKSOUND
“Harmonic is a consistently surprising collection that arises far above mere side-project status.” – ROCK A ROLLA
“Philm cover a lot of exciting bases from jazzy sleaze rock on Way Down to angular, mid-80s post-hardcore reminiscent of Slint, Fugazi and the Minutemen (Vitriolize)…its range of virtuosos chops never loses its capacity to surprise.” – METAL HAMMER