Songs To Drive To; Cry, And Make Love To LP/Digital Out Oct 15 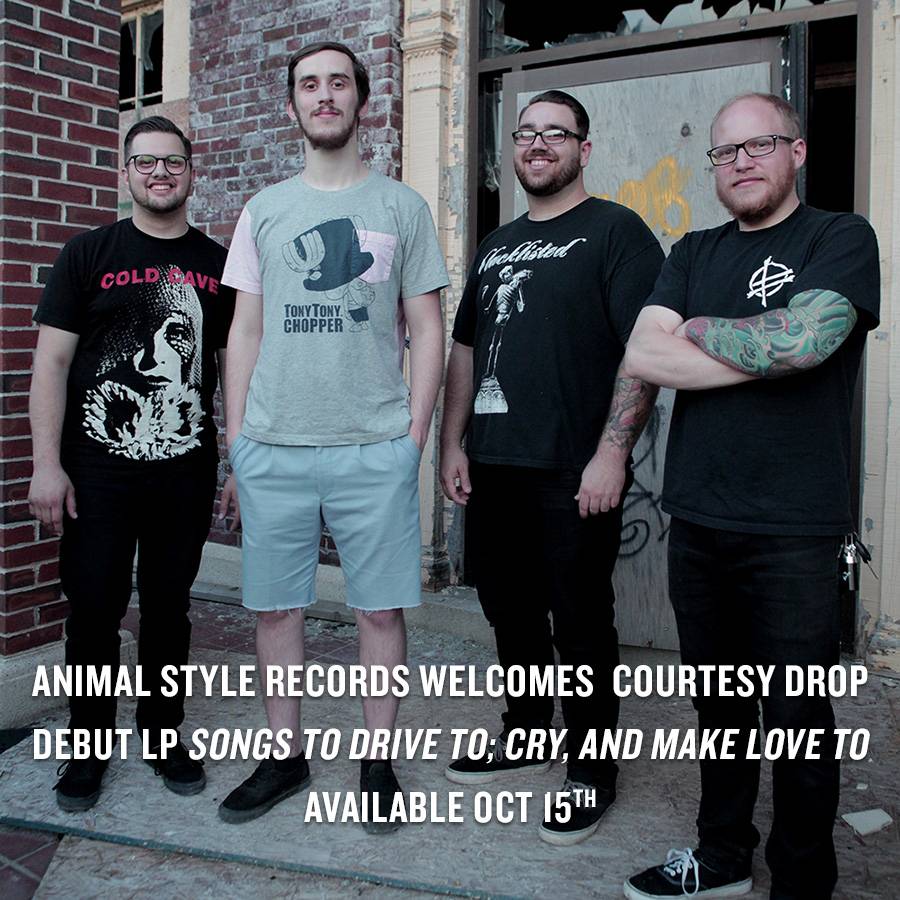 Nashville, TN post hardcore band Courtesy Drop have signed with Los Angeles based indie Animal Style Records. The band’s LP, Songs To Drive To; Cry, And Make Love To, will be released on vinyl and digitally on October 15 (pressing info TBA).

two tracks from the record, “Science is a Liar Sometimes” and “Mineral Extracts”, are now streaming at www.courtesydrop.bandcamp.com. The band kicks off its summer tour on July 3rd with a hometown show at Nashville’s The Owl Farm.

“Quit running against the wind,” wrote guitarist and vocalist Paul Chalos of the Nashville-based post-hardcore outfit COURTESY DROP in the album’s whirlwind of a single, “Science is a Liar Sometimes.” The lyric sits in the context of cautioning against unexamined self-assuredness, but it reflects the band’s entire existence rather accurately. From their nonchalant attitude, to their commitment to music as a form of self-expression rather than commercialism, to the pleasantly unpolished sound of their newest full-length, Songs to Drive to; Cry, and Make Love To, COURTESY DROP likes to let things be what they are. No more, no less.

COURTESY DROP started out simply, as an outlet to pay tribute to Indiana bands of old. As its members grew older and found themselves more focused on music, however, they gained a level of discontent for the genre boundaries within the underground music scene. This translates to genre-defying musical elements that help the band naturally stand out from the crowd, drawing from a diverse range of influences such as Cursive, Mineral, Envy, and Bjork.

There is no intended lyrical theme to Songs to Drive To; Cry and Make Love To as a whole, but the album conveys a powerful sense of frustration. Chalos describes the album as having been written from three different perspectives: depression, complacency, and reflection. “Quit running against the wind” could find a fitting home in many of the album’s tracks. In its succinctness, it could easily be interpreted as an incidental undertone to the entirety of the record, obtaining different meaning from each of the three perspectives Chalos wrote the album’s thirteen songs from.
COURTESY DROP is gearing up for the release of Songs to Drive To; Cry and Make Love To on Animal Style Records on October 15, 2013. The record will see a vinyl and digital release, with pressing details to be announced. The band previously released What Makes This Place Worth Calling Our Home in 2011.