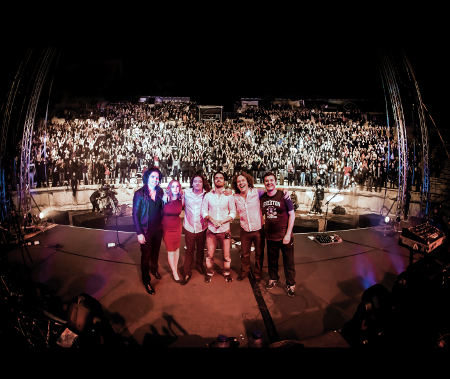 In May 2012 Anathema released Weather Systems, the most acclaimed and successful album of a career that has spanned over two decades. The album scored high in numerous critics end of year polls around the world and cemented the band’s reputation as one of the most exciting and progressive band around.

Following the release of the album the band embarked on a lengthy tour. The European leg opened with a triumphant one-off show at the ancient Roman theatre of Philippopolis with the Plovdiv Philharmonic Orchestra in September 2012. This incredible show was documented by acclaimed filmmaker Lasse Hoile (Steven Wilson, Porcupine Tree, Opeth, Dream Theater), the stunning results of which will be released as Universal.

Fans can relive the magic on September 23rd. The film is released as a four disc audio-visual set, capturing the magic of the evening on Blu-ray, DVD and two CD’s. This limited edition set features bonus audio content and footage of the band recorded at the Union Chapel in London. A two disc (CD & DVD) set and a Blu-ray edition will also be available.

Formed in 1990 in Liverpool, Anathema have been at the forefront of the UK rock/metal movement for many years. They began their journey as pioneers of melodic heavy music, influencing a myriad of bands to follow them, before outgrowing all genres and limitations as they fearlessly explored new territory and new ways to express feeling through sound.

The bands experimentation has seen acclaim escalate with each release. Last year’s Weather Systems, Anathema’s ninth studio album was their best received yet, with critics the world over choosing it as one of their favourite releases of the year.

PRAISE FOR WEATHER SYSTEMS:
‘this is another breathtaking piece of work… a nailed-on album of the year contender’ Metal Hammer – 9/10
‘It is truly majestic, heavenly – Is it another masterpiece? Of course it is.’ Terrorizer – 5/5
‘Anathema continue to make music that glows with meaning and a love for art’s external power to touch the soul. Still special, increasingly extraordinary; the band and this album will be cherished.’ Prog – #1 CRITICS CHOICE 2012

I Am Legion release ‘Make Those Move’ as free download‏