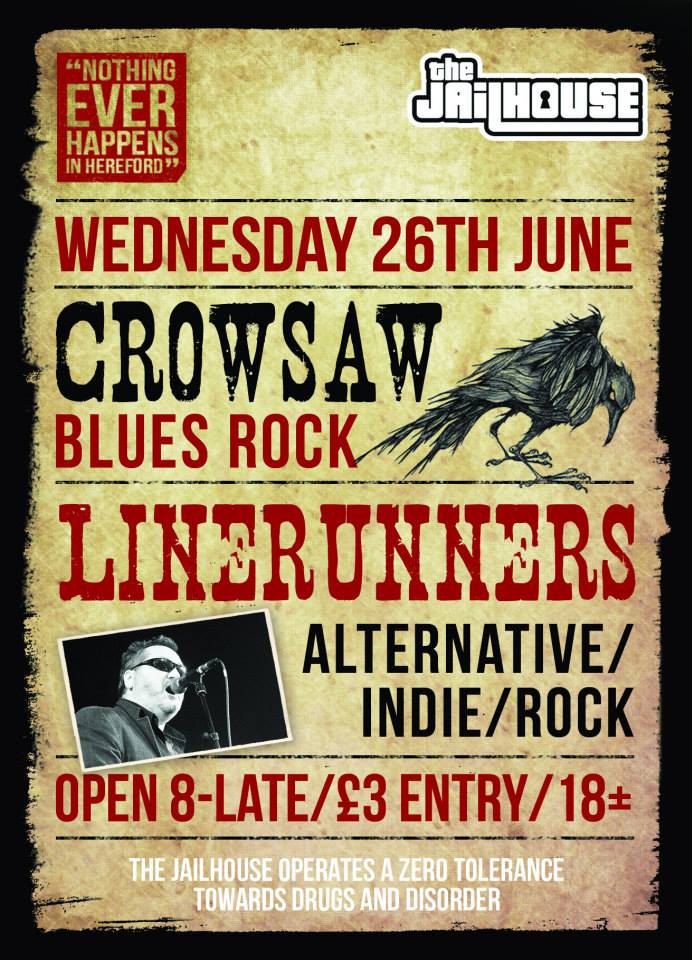 Fans of live music in Herefordshire are in for a treat next week, as two fantastic bands visit The Jailhouse to perform on Wednesday 26th June, as part of live music promotion ‘Nothing Ever Happens in Hereford’.

Crowsaw have received some fantastic reviews in their native South Wales and beyond, with their heavy blues riffs being well received. The band, made up of Elvin Robinson, Glyn Mason and Rob Lomax, cite a diverse range of artists among their influences, ensuring their appeal to a wide range of audiences. “They fuse the grooving sensibilities of Hendrix with the with the uncompromising heads-down drive of Sabbath and the swagger of Zeppelin,” says Moray Stuart of Classic Blues Magazine.

They will be joined by Herefordshire band Linerunners, who were formed from two former bands Beyond This and The Fex. Steve and Phil Davies joined from The Fex half, with Tobias Armitage and Nick Betts hailing from Beyond This. They quickly developed a distinctive sound and song writing style whilst gigging in and around Hereford, before recording their first EP in 1998, followed by another in 2001. Charlotte Millward-Brookes joined in 2006, adding a new vocal dimension and another two EP’s have followed in subsequent years.
They are currently working on their album.

“We’re really looking forward to welcoming Crowsaw and Linerunners to The Jailhouse,” says Anthony Murphy, Manager of the Gaol Street club. “We have a fantastic sound system and stage, making The Jailhouse the perfect venue for the live music that local people tell us is needed in Hereford. We’re very happy to oblige and look forward to welcoming live music fans to enjoy two fantastic bands on Wednesday night.”

The Jailhouse will be open from 8pm on Wednesday to everyone aged 18+. Entry is £3, payable on the door.