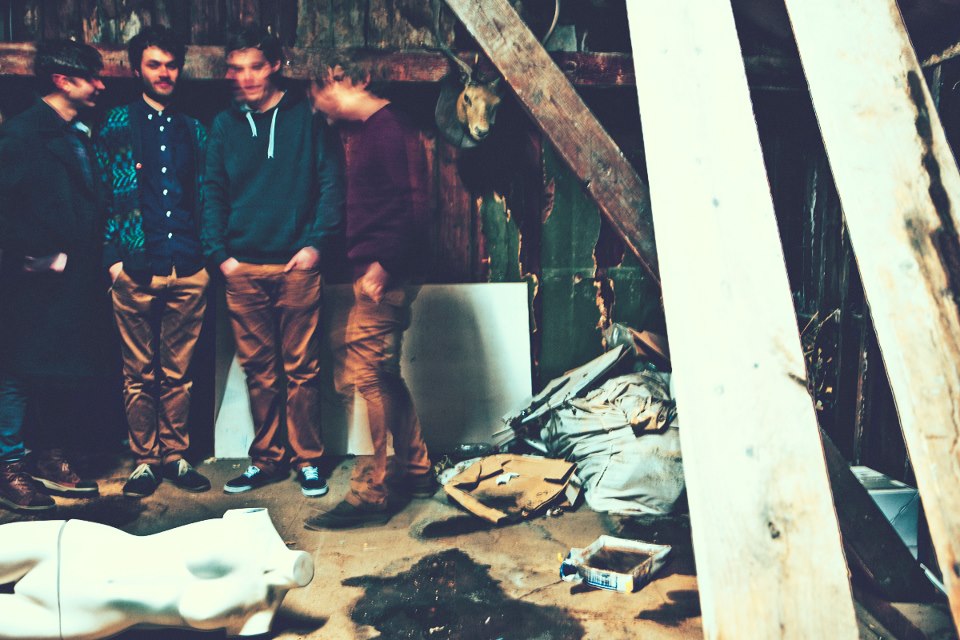 “… it’s going to be really exciting listening to this band develop even further in the future.” – The 405

“Lighthearted and exciting… calamitous yet incredibly tight.” – Drowned In Sound

For fans of… Spring Offensive, Tubelord, Tall Ships, Adults, The Elderly and Children

Math pop band Olypmians are pleased to announce the release of their forthcoming single Filling My Heart With Weird Dreams, out 2nd April, taken from their forthcoming EP Adventure Gun released on 29th April via Barely Regal Records.

Consisting of Daniel Harvey (vocals/guitar/synth); Benjamin Thompson (vocals/guitar/synth/trumpet); Christopher Neil (vocals/bass) and Michael Parkin (vocals/drums/glock), and having formed due to their love for technically proficient bands such as Youthmovies and Don Caballero, the four-piece from Norwich have honed their sound, building a psychedelic twist into their penchant for technical exuberance.

Their new single, Filling My Heart With Weird Dreams, sums up the bands intentions. Highlighting a rich, yet patchwork sound similar in style to Kotki Dwa’s second release ‘Staycations’. The track is focused by rich lead vocals, succulent harmonies and sugar-induced synth pulses and forms a remarkable statement of intent from a band bursting with an impressive creative vision.

The record itself is a showcase for an experimental band who also have the distinct ability to write uplifting pop music – putting a smile on your face that is difficult to wipe off. There is a smattering of electronic samples, incessant drum beats that twist and turn, warming harmonies and a musicianship that is subtle yet lofty. All of this is captured in opening track ‘Mountains’ which builds slowly, and rather innocuously, into a track laden with heavy synth, ethereal vocals, compact harmonies and snappy, agile drum beats. If Maps and Atlases made love to Local Natives whilst having and affair with Volcano I’m Still Excited, they would give birth to Olympians – your new favourite band.

Watch the video for Filling My Heart With Weird Dreams

Olympians have had a stunning introduction in their formative years having supported The Invisible, played End of the Road Festival in 2012 and embarked on a support slot with Tubelord on a full UK tour. Having garnered praise from the likes of The 405 (comparing the band to Spring Offensive and Adults, The Elderly and Children) and Drowned In Sound, it is clear Olympians have captured the hearts of both the press and public alike and aim to continue this throughout 2013.

You can catch Olympians live at a venue near you throughout April and May: