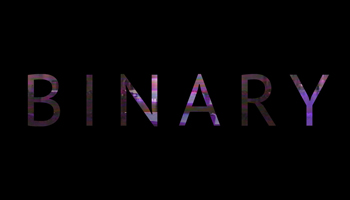 ‘You Need The Blue Key’ is the groups first offering and if any of their new material is anything alike, they may be on to look out for in 2013’ – Hype Track

‘You can imagine crowds – big ones, at that – singing along’ – The Guardian

After the release of single ‘You Need The Blue Key’ in January,  Binary are now set to follow it up with the release of ‘G.O.D’, the second track from their forthcoming debut EP ‘Amber.’

‘G.O.D’ is an menacing exercise in mood and dynamics, building around a simple electronic drum loop and guitar rift that slowly expands into an anthemic and sweeping sound-scape, full of atmosphere, texture, melody and emotion.

It serves as the perfect prelude to the ‘Amber EP’ and signals a fearless young band honing their sound and showing an exciting glimpse into the musical journey that lies ahead.

‘Minimalism’ instantly grabs with its skull cracking drums and gothic Southern rock groove. Vocalist David Troster luring us into Binary’s dark and dense musical diorama as he sinisterly informs us, ‘I am the curator of this museum, no on out, no one in’

‘Dynamo’ and ‘You Need The Blue Key’ expertly meld electronic and noise rock influences to create a uniquely abrasive and intense sound without ever forsaking the bands clever pop sensibility, whilst ‘Pure Decay’ rides on a shimmering psychedelic wave reminiscent of early Smashing Pumpkins and Jane’s Addiction.

“We wanted to make something that captured us at a particular moment in time. A distillation of all our influences and weirdness into a body of work.

Its very much a transitional record. Where we came from when we started and we’re we want to go sonically, but above all we want to bring the strange back into rock n’ roll”

DEAD IN THE DIRT: Writing Process Of Debut LP Complete