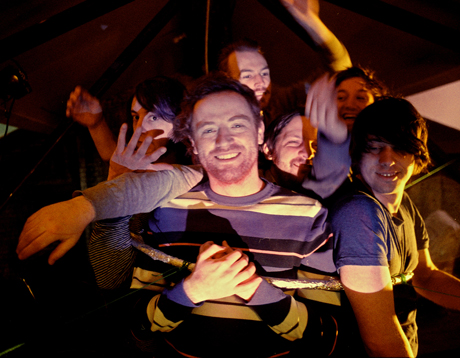 AHEAD OF SUMMER FULL-LENGTH RELEASE

ON TOUR THIS SPRING IN NORTH AMERICA AND EUROPE; STOPPING AT SXSW

2013 is looking to be a breakout year for the six-piece Canadian outfit Royal Canoe. The Winnipeg natives just signed with Roll Call Records for the release of a full-length album later this year in the U.S., and they’re gearing up for a heavy few months of touring that include stops at SXSW, dates in the U.S. and Europe, performances with Fol Chen, Of Montreal, ON AN ON and more.

The band garnered serious buzz at the 2012 CMJ Music Marathin, where KCRW named them the “Sleeper Hit” of the festival, stating “their super inventive sound is unbelievably rich and catchy,” and landed on “Best of CMJ” lists from Consequence of Sound, New York Times and more.

In 2012, Royal Canoe released two EPs (Purple & Gold, Extended Play) which both received critical acclaim. Holding the #1 spot at We Are Hunted for 3-weeks, Filter declares “Buckle up – the band is anything but your standard indie-pop. Known for their genre bending approach and their songs are clearly written with innovation in mind. We dare you not to dance.” Similarly, Baeble proclaims “If you were to marry the harmonies and psychedelic pop of Animal Collective with the frenzied vocal phrasing of Modest Mouse and threw in the falsettos of the Temper Trap for good measure, you can imagine Royal Canoe’s sound.”