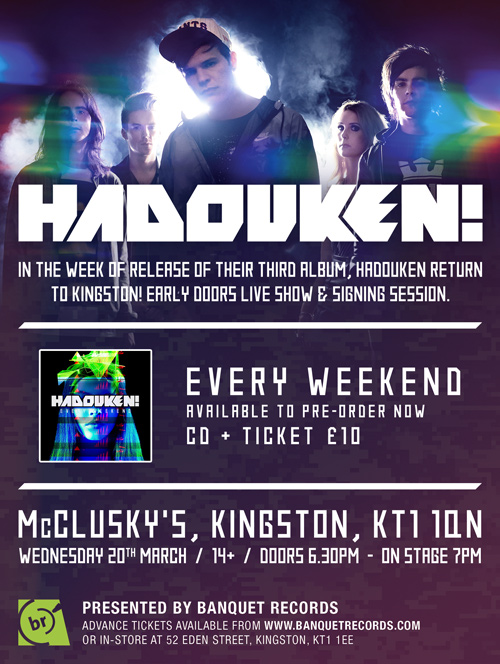 ‘EVERY WEEKEND’ RELEASED ON MARCH 18th VIA SURFACE NOISE RECORDINGS

Hadouken! will celebrate the release of their much anticipated third album ‘Every Weekend’ on March 20th with a one-off show for fans presented by Banquet Records at McClusky’s in Kingston upon Thames.

Released on March 18th ‘Every Weekend’ is the band’s most accomplished and convincing musical statement yet. Recorded in various locations, it features production contributions from the most cutting edge and successful names in modern Bass music, including Noisia, Loadstar, Aeph, Blokhead and Drumsound & Bassline Smith.

Pre-order your £10 ticket for this special event via Banquet Records and get a copy of new album ‘Every Weekend’ on CD. The band, who will be on stage at 7pm, will also host a signing session at Banquet in advance of the show that is open to over 14’s.

The album is accompanied by the new single ‘Levitate’, released on March 11th and produced by Ram Records act Loadstar.  ‘Levitate’ is featured in their ‘People Are Awesome 2013’ viral video that has so far been watched by 34.5million people around the world to date.