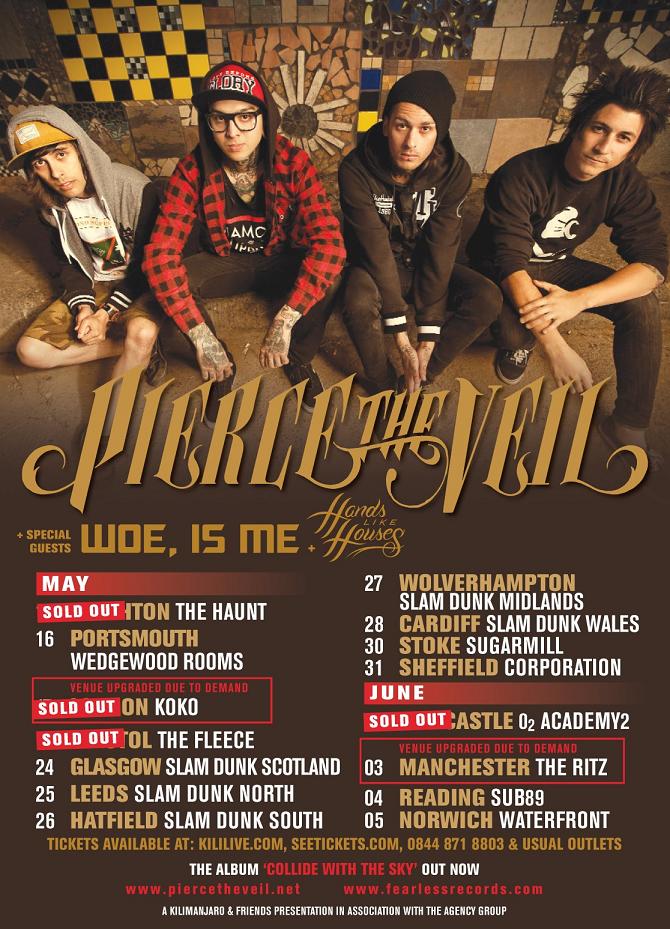 Woe Is Me and Hands Like Houses will join Pierce The Veil on their AUK headline tour in May and June. The trek includes appearances at Slam Dunk Festival (May 24-28).

Woe Is Me is currently out as direct support on Of Mice & Men’s headline North American tour and will appear at Soundwave in Australia Feb 23-March 4. Hands Like Houses will play a string of U.S, shows this spring with I The Mighty. Both bands are confirmed for the 2013 Vans Warped Tour this summer.

Confront your enemies, stand up for yourself and fight through adversity: literally, figuratively and every way in between. When it comes to creating art, don’t hold back. Put it all out on the table. That’s the message of Woe, Is Me, whose personal story of triumph through shared struggle blazes a shining pathway for their fans to follow. And it’s a point-of-view delivered through an engaging live show where crowd-participation is a must.

In Woe, Is Me, the sludgy, aggressive bottom end of vintage nu-metal collides with modern breakdowns and electronics-enhanced atmosphere, alongside the melodic sing-a-long anthem style of A Day To Remember and the arresting emotional ferocity of screamo standard-bearers like The Used and My Chemical Romance; all with a powerful new twist. When a fan asked the band on Twitter to describe their jaw-dropping and brutal yet deliciously poppy and inspiring album Genesi[s] in just five words, their reply was simply this: “Really fucking catchy and heavy.”

After a lineup shakeup that would have decimated lesser bands, the Atlanta-bred six-piece has risen like a phoenix from the ashes with their sophomore-slump-killing new album, Genesi[s]. Woe, Is Me’s second offering is truly a rebirth. It’s the beginning of something new, something of vital importance to the modern music scene that carries with it a message of consequence.

Hands Like Houses are a fresh and explosive 6 piece from Canberra, Australia. With a rapidly expanding international fanbase, the band has captivated audiences with their electric blend of technical, effects- heavy songwriting with post-hardcore passion and stage presence. Driven by rich lyricism and melodic, emotive vocals in the vein of Emarosa and The Getaway Plan, the band presents a complex and finely crafted mix of guitar and electronics, drawing from a broad range of influences including Thrice, The Receiving End of Sirens and Closure in Moscow.

The band’s acclaimed debut album ʻGround Dwellerʼ was produced by Cameron Mizell of Chango Studios (Woe, Is Me, Sleeping With Sirens,Memphis May Fire). Boasting a dedicated and fast-growing international fanbase, built through years of personally managing their social networks and independent promotion and touring, Hands Like Houses released Ground Dweller lasr March 13th worldwide through Rise Records. Buoyed by exceptional online hype and pre-order numbers for a debut release, the record broke into the US Billboard Heatseekers and Top 200 charts at #2 and #140 respectively in itsʼ first week..

To date, the band has supported a number of notable acts from Australia and around the world, including The Getup Kids (USA), As Tall As Lions (USA), The Getaway Plan (AUS), Dream On Dreamer (AUS), Hopes Die Last (ITA) and Tonight Alive (AUS). 2012 saw Hands Like Houses add to their list of local, national and international supports, beginning with Pushover Festival in Melbourne Australia in support of Parkway Drive, Tonight Alive, 360 and others, and then the Rise Records Freshman Tour with The Air I Breathe, My Ticket Home, and Palisades. In addition, the band performed on the entire 2012 Scream It Like You Mean It festival tour, performing in support of Attack, Attack, We Came As Romans and The Acacia Strain and supported Pierce The Veil on their Fall headlining national tour with Sleeping With Sirens.

OUT TODAY: The Courtesans cover Frankie Goes To Hollywood‏