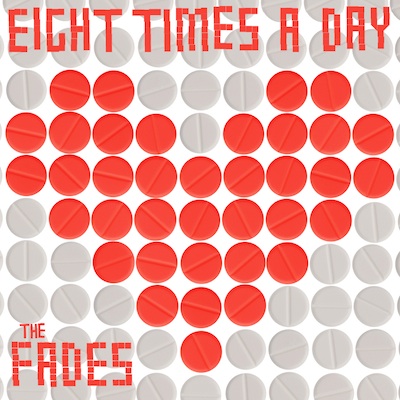 The Fades are proud to share with you their infectious new track, Eight Times A Day, taken from fourth coming AA single which is available from 14th February 2013 through Genepool Records.

“It is arguably the best garage rock album since Songs for the Deaf” – 10/ 10 Louderthanwar.com
“To bring it off takes the commitment, conviction – and deafening power – of a band like The Fades” – Tom Robinson BBC Radio 1
“The album grabs you by the balls and refuses to let go until you’re a gibbering, crumpled, sweaty mess begging for more.” – 5/5 Artrocker Magazine
“‘Ragnarok’ is a candidate for gold star status” – 4.5 stars Clickmusic.com
“Hands down, one of the most diverse yet cohesive albums of 2012” – Popblerd.com

Eight Times A Day is taken from The Fades critically acclaimed 5 star album, Ragnarok. The track is a short, sharp indie rock ear worm, performed in the style of an advert jingle offering new ways to manage your love addictions. The AA single, along with previously unreleased track Free Little Pill, comes as a Valentines musical hamper full of audio flowers, chocolates, morning after pills and cab numbers exploring love in all it’s pain and glory, be it for another person or some other vice!