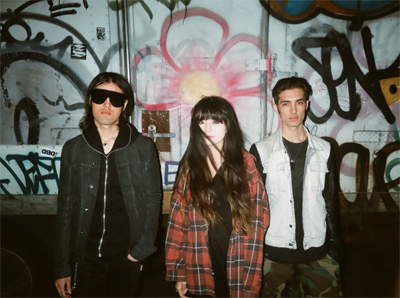 GHXST is a New York based noise grunge trio composed of Shelley X, Chris Wild and Nathan La Guerra. With influences such as the Jesus and Mary Chain, White Zombie, and Sonic Youth, they evoke the rockin’ 90s with a new kind of stylish noise rock, full of killer distortion, bluesy vocals, and heavy drums. In June they released their debut single ‘Black Camaro’ on London’s Club.The.Mammoth and Tip Top Recordings and followed that by and extensive UK Tour.

They now release new video ‘Doomgirl’ alongside a FREE DOWNLOAD of the track, which is available via their bandcamp page here: http://ghxstmusic.bandcamp.com/track/doomgirl

“The class of No Wave being indoctrinated into a satanic cult run by A Place To Bury Strangers.” – ARTROCKER

A New York trio, the band’s output is grunge in the sense of fusing fuzzed out guitars with candy-bar-sweet melodies. Oh, and noise – lots and lots of noise. – CLASH