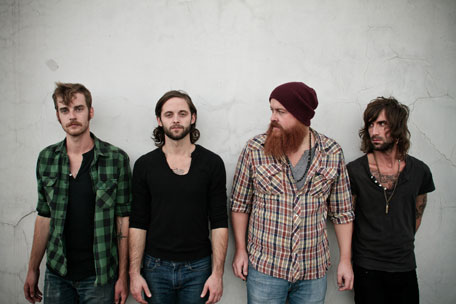 Atlantic Record‘s latest signing The Rouge is gearing up for the release of their 6-song EP Blurry, due out February 12. AOL’s Spinner.com is premiering the single “Pressure,” declaring it an “upbeat anthem of standing up against the things that get you down.”

Blurry is the culmination of a long journey for the Denver natives. Their charismatic presence and melodic sensibilities launched them on a path towards stardom that saw them quickly signing to a label and creating an album of material that they weren’t proud of. Frontman Josh Vaught explains “We needed to stop and rethink what we were’t doing. We had crafted these songs, but they were really safe. It wasn’t us.”

The group scrapped their tunes, moved to Nashville and started

working with producers Adam Landry and Justin Collins (Deer Tick, k.d. lang) on new tracks using a very stripped-down approach, eschewing ProTools and other modern recording conveniences for an old-school, reel-to-reel, lets-do-it-in-one-take recording session. The new songs took on a more organic feel, with warmer hues and an acoustic base.

If one thing truly stands out about Blurry, it’s the maturity of the songs: while the energy of the band’s early days is still present, the tracks themselves sound more thoughtful.

Jaye Jayle shares the video for “A Cold Wind” from Prisyn, the new album out now on Sargent House

Sweet Weapons Begin Tracking Their Debut LP This Week; Album Due Out in Spring 2013 via Escapist Records‏