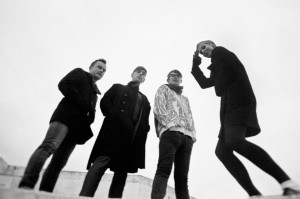 “Their riffs and twangs have a darker and edgy feel to them. We can imagine if Tarantino ever heard Lizzie and the Yes Men, he’d get them on his next film soundtrack sharpish” Breaking More Waves

“The debut single from Lizzie and the Yes Men is a fabulously upbeat summer tune that channels Debbie Harry, The Ramones and even the whistling genius of Roger Whittaker. It manages to stay on the right side of ‘jaunty’ with its Spectoresque melodies.” Music Week

‘DESERTS’ IS RELEASED ON 10th DECEMBER 2012
Following the release of debut single “The Broadwalk” (which has grabbed the attention of Dazed Digital, Frank Skinner, Channel 4, Nemone and Chris Hawkins to name a few), London quartet Lizzie and The Yes Men have announced the release of new single ‘Deserts’.

Describing themselves as ‘Tarantino surf-pop,’ Lizzie and The Yes Men combine their love for the cinematic sounds of Tarantino with surf, pop and desert rock, drawing inspiration from bands such as Best Coast, The Ronettes ,The Beach Boys, Love and the Dum Dum Girls.

2012 saw Lizzie and the Yes Men perform shows in the UK, Sweden and France as well as an Italian tour. They are now preparing for a few London shows to coincide with the release of Deserts.