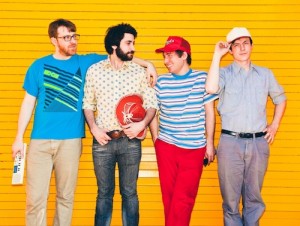 Frontier Ruckus have confirmed that they have signed to Loose (Felice Brothers, Dawes, Deer Tick) for their new record ‘Eternity Of Dimming‘. The double album will consist of 20 tracks and will be released on the 28th January.

“Your eyelashes are like needles,” croons vocalist Matthew Milia on the first track to appear from the record, a soft and tender number by the name of ‘Eyelashes’. As a gentle banjo led melody makes way for a tender brass accompaniment, ‘Eyelashes’ grows into a yearning and sumptuous track, an undeniable sense of nostalgia leaking from every creak and tone …if the rest of the record sounds anything like this leading track, we’re all in for a spectacular treat.”
– The Line Of Best Fit