WE ARE THE PHYSICS announce new album YOUR FRIEND, THE ATOM released 22nd October 2012‏ 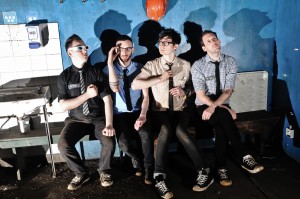 We Are The Physics are set to release their brand new album – Your Friend, The Atom – on 22nd October 2012.

The Glasgow sci-fi new wave punks – consisting of three Michaels and one Chris – recorded the follow-up to 2008’s debut We Are The Physics Are OK At Music in their home city with producer Thomas McNeice.

“We recorded the album over eight months in a hole next to the bit where Primal Scream store all their gear”, explains vocalist Michael M, “we didn’t use any because it’s locked up. But we stared at it through gates and we recorded the sound of longing. Eight months wasn’t continuous time in the studio, it amounted to about a week of actual work. We all have actual human jobs and our producer, Thomas, kept going away on tour with Gang Of Four so it prolonged the recording process. We can’t be angry at him because he’s our pal and recorded and mixed the whole thing for Tic Tacs.”

Your Friend, The Atom features both previous singles – the eponymous paean to Croatian tennis star Goran Ivanisevic, and frantic shoutfest Applied Robotics – as well as live favourite and future single Napoleon Loves Josephine. The disco-punk stormer Dildonics and code-quoting Circuit Babies have been live staples for some time, while There Is No Cure For The Common Cold So Don’t Expect A Cure For Cancer takes their stop-start jerk-pop to darker new levels with explosive curve-ball Olivia Neutron Bomb rounding off proceedings.

That’s not to suggest the foursome have strayed too far from the sound that has them consistently marked as one of the UK’s best live bands.

“Every time you hear about a band being ‘experimental’ in the studio, it’s as bland as them recording a song barefoot or something ‘zany’ like recording a cat’s yawn and looping it. We’re a very subtle and reserved band, so we’d never resort to such tactics. Just kidding – Michael Guitar built a screeching Atari Punk Console into a shoe and used it to make dying Nintendo sounds. At first it was in a Twiglet tin, but that doesn’t look as good as shoe. He used it while recording a cat yawning. Both he and the cat were barefoot.

“If there’s any sort of theme to the record it’s of ideas that seem good at the time but, in retrospect, are cataclysmically bad, echoing the actual album itself. There are songs on there about knee-jerk reactions, capitalising on culture, embracing failure, having affairs, the redundancy of male genitalia, the democratisation of technology, nuclear power, 1960s space exploration, radiation poisoning and junkies eating buns. We wouldn’t ever write a love song – there’s 60 years of them if you want to start sifting through them.”

We Are The Physics formed in Glasgow in 2005, taking influences from bands such as Devo, Ex Models, Cardiacs, The Skids, Servotron, Brainiac and Buddy Holly.

Known for their eccentric and frenetic stage shows, their nerd rock b-movie aesthetic has taken them around the world several times, sharing tours and Irn Bru with acts including Polysics, Art Brut, Franz Ferdinand, 30 Seconds To Mars and Sigue Sigue Sputnik, as well as playing major roles at UK and European festivals, including the NME/Radio 1 Stage at T In The Park.

2013 will see them starring in God Help The Girl, the feature film written and directed by Belle & Sebastian’s Stuart Murdoch. In the meantime, they’ll be making a lot of noise, very fast, somewhere near you.

Your Friend, The Atom Tracklisting:

Go Go Nucleo -> For Science
Applied Robotics
(e.g. Apollo 11)
Napoleon Loves Josephine
And So Now We’re Wrestling With The Body Politic
There Is No Cure For The Common Cold So Don’t Expect A Cure For Cancer
Goran Ivanisevic
Dildonics
Cluedo
Eat Something
All My Friends Are JPEGs
Junkie Buns
Circuit Babies
Olivia Neutron Bomb