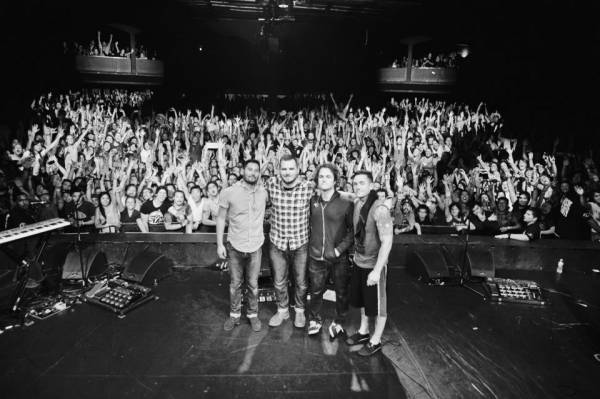 “Thrice in concert, on this tour more than ever, was a career on display,” stated Billboard Magazine about the recently completed farewell tour undertaken by Southern California’s THRICE. The Orange County-based four-piece announced a hiatus last year after 13 years together and eight full-length releases.

“This is a live record that is truly live,” commented drummer Riley Breckenridge. “There are no overdubs, no edits and no pitch corrections. We wanted this to be an honest and accurate representation of a show from our Farewell Tour and a memento for our fans, and that’s exactly what it is.”

Along the tour, live audio was recorded at select stops and has now been compiled into Anthology, which will be released on Staple Records/Workhorse Music Group October 29, 2012. The live recording features 24 songs and will be available digitally, on two CDs, and as a limited edition box set containing four LP’s. The LP box set is limited to just 3000 stamped and numbered pieces and will include a 24-page booklet along with 2 black LP’s and 2 white LP’s all on 180 gram vinyl. The track listing and pre-order details will be announced in the coming weeks.

A must-have item for collectors, MTV noted in their show review that, “the group covered their vast catalog with a lengthy set list, which was created using fan’s votes on the band’s website, that left the mourning crowd wanting more,” while the band’s hometown daily paper, the O.C. Register added, “…an epic performance culled from all points in their catalog that will loom large in their legend — and their career in general, which had reached personal-best peaks with the last two albums, 2009’s turning point Beggars and its tension-filled follow-up Major/Minor, from last September.”

Thrice released their first proper full-length, Identity Crisis, in 2001 and quickly stormed to the forefront of the indie music scene as listeners rejoiced and formed what can only be described as a cult following. Thrice went on to release six highly praised albums – fan favorites The Illusion Of Safety (2002), The Artist In The Ambulance (2003) and Vheissu (2005), the brilliant and intricate four-piece concept album The Alchemy Index: Fire and Water (2007) and Earth and Air (2008), and the band-centric masterpiece, Beggars (2009). Thrice released their most recent full length, Major/Minor, last September on Vagrant Records. Thrice has become a staple in the alternative-modern-rock world for nearly ten years now and is known for effortlessly and continuously releasing groundbreaking records.