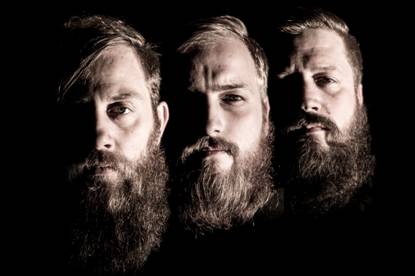 Denmark’s The White Album will release their mini-album ‘Conquistador’ on September 24th through Popular Recordings. Recorded in the bands’ own forest cabin, it features six neo indie-folk tracks, rich in depth, heart and musicality.

Opening track ‘Counting Treasures’ is a heart-wrenching sonnet that builds to a military march, with a rousing brass section and introduces listeners to the bands’ trademark three-part harmonies. These are perfectly showcased in the acapella track ‘Trenches’ before blending into the absorbing ‘Seasons End’, which recalls the restrained beauty of Jose Gonzalez and Kings of Convenience.

‘Your Mouth Is A Fist’ is the first single to be taken from the mini-album and is accompanied by an equally captivating video. Closing with the sublime ‘Let’s Go Out’, in ‘Conquistador’ The White Album have achieved in six songs what some acts spend their careers trying to craft; a collection of starkly honest tracks which instantly make their mark and beg for further listens.

Coming from a fine lineage of Scandinavian folk acts, The White Album began to make waves with the self-release of their first EP. Attracting the likes of huge US site NPR, who listed it in their top five best albums on Bandcamp in 2011, they have started to create a name for themselves in their stunning live performances as much as their recorded output.

During a short UK tour last year, the band received unprecedented feedback, with one of their songs jumping into the Amazing Radio playlist despite little promotion. A truly organic act, many discovered their music through word of mouth and built for their recent UK dates, which saw them play a headline show at Sheffield’s Tramlines Festival and two London’s gigs.