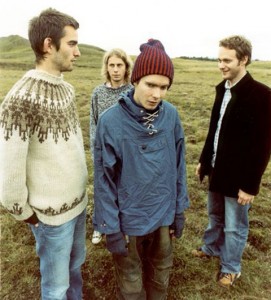 Sigur Ros have announced a full UK tour for March next year.

The Icelandic band, who released their new album ‘Valtari’ in May, will play five shows on the tour.

Sigur Rós follow up their run of summer festivals by announcing their first headline tour since 2008 for UK/Europe in February/March 2013. The 15-date run will see the band take the stage alongside all the additional players and expanded brass and string sections of the summer shows. This time, however, they will be incorporated into a completely new show, which also comes with the potent promise of brand new material, post-dating even this year’s ambient-leaning ‘Valtari’ album.

“You are limited to what you can accomplish with the 20-minute changeovers and all other constraints of a festival,” says bassist Georg Holm. “To us, this summer’s really been one long warm-up for what’s to come.”

There are rumblings from within the band of a “hard left turn” in terms of what these changes might constitute. Suffice to say, for now it’s set to be a compelling ‘watch this space’ scenario.

The dates begin at Glasgow SECC on March 2 and end on March 8, when the band play the second of two dates at London’s O2 Academy Brixton. They will also play gigs at Manchester’s O2 Apollo and Wolverhampton Civic Hall.

‘Valtari’ is the sixth release from the Icelandic band and the follow up to 2008’s ‘Með suð í eyrum við spilum endalaust’, marking an end to their short-lived “indefinite hiatus”.

The run of UK dates is part of a full European tour which will also see the band visit Portugal, Italy, Holland, Germany, Switzerland, Belgium and France. The band are also booked to tour Australia later this year.