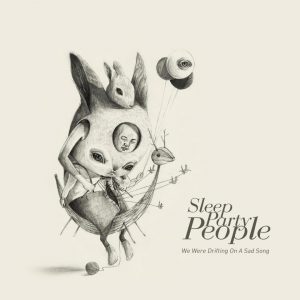 Danish dream-gazers Sleep Party People continue their graceful devotion to theatricality in their videos with ‘Gazing At The Moon.’ The glistening song plays along like a lullaby to one man’s tumultuous journey on medication to other realities. The track comes from their recently released We Were Drifting on a Sad Song, which is available on Brine & Barnacles Records in the US and on Blood and Biscuits in the UK.

Sleep Party People is the brainchild of Brian Batz, a Danish multi-instrumentalist with a boundless imagination. Taking as inspiration the work of Boards Of Canada, David Lynch and Erik Satie, and some classic movie soundtracks, Batz found the sound of the old battered piano in his apartment, coupled with a freaky electronic alteration of his recorded voice, created an eerie, hypnotic sound.

The overall atmosphere he fashioned, one that evokes the disorientating world between being asleep and awake, wasn’t a conscious effort. “I’ve always been a huge fan of instrumental ambient music, but I never felt that I should throw myself into making such music. When I started the process, however, I really got the taste of it and loved the blend between the organic and digital world.”

Adding a further four musicians to the line up following the release of the debut, self-titled album, the quintet – hidden behind rabbit masks – served up an inspired cocktail of explosive shoegaze and electronic dream pop on their first world-wide tour.
Back home in Denmark electronic pioneer Trentemøller showed his approval by offering SPP a slot on his sold out tour – followed by The Antlers and Efterklang pledging allegiance asking SPP to join them as support on their Scandinavian outings. Appearances at Roskilde, By:larm, Eurosonic along with an extensive European tour and a youtube video that clocked almost half a million views further cemented Sleep Party People’s burgeoning reputation.