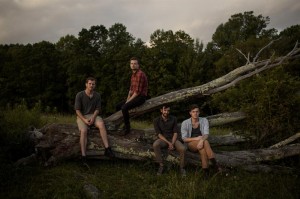 North Carolina’s Flagship has released a brand new music video for “Still I Wait,” a track from the band’s debut EP blackbush, out now via Bright Antenna/ILG. Watch the video now at Filter, who says it “exemplifies their knack for pathos. It’s both immediately captivating and unique, largely due to the impressive vocals by singer/songwriter Drake Margolnick.”

The 5-song EP “matches the emotional and nearly spiritual alternative rock of U2 circa Achtung Baby, with the deep-throated baritone delivery of lead singer Drake Margolnick ala Ian Curtis from Joy Division and some of the seething anger and rawness of We Are Augustines,” according to Baeble Music. Likewise, The Audio Perv declares it “as ambient as it is powerful.”

For a full EP stream and a look inside the making of blackbush, check out the behind-the-scenes video at Earmilk.com. Earlier this year, American Songwriter premiered the video for blackbush single “Backseat”, watch it here.

The 5-piece band is the newest addition to Bright Antenna, home to such artists as OMD, The Wombats, Magic Wands, Middle Class Rut, Beware of Darkness and more.