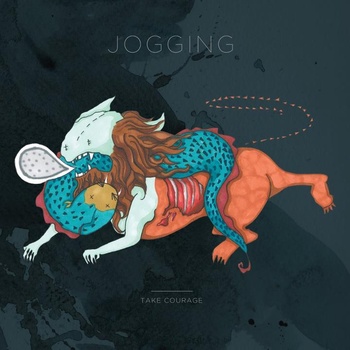 Jogging, the talented trio which hail from Dublin, have just previewed their forthcoming album due for official release 24th August on Out On A Limb Records. Find the album streaming below and pre-order information.

Take Courage is Jogging’s follow-up to the much-acclaimed Minutes (2010, Richter Collective), taking a leap in fidelity having been recorded in June 2012 with U.S. producer Chris Common (ex-These Arms Are Snakes, with production credits for Minus The Bear, Pelican, Mastodon, and Tiny Vipers under his belt). It will be Jogging’s first release for Out On A Limb Records, coming out on vinyl (with download) and digital on Friday, August 24th.

Jogging awakened in 2009 and quickly gained a formidable live reputation. They have toured Ireland and the UK, sharing the stage with Wire, Polvo, Ponytail, And You Will Know Us By The Trail Of Dead and Themselves amongst others. Jogging’s music has been described as “an intense, raw blend of post-hardcore and gutsy indie rock”.

Take Courage sees Jogging dealing with constantly rearranging social structures, the aging process, and the effects of living out an extended teenhood throughout one’s twenties, all served up with a hefty dollop of malice and spite (albeit mostly directed towards same selves). The composition and collaboration is a marked progression on Minutes, where no part overstays its welcome and every transition is seamless yet startling. Sonically, it is worlds apart from the first record, as drums thunder their way through each turn, the well-rounded yet distorted bass rumbles and drives the melodies and the guitars cut though like ice-picks. The band’s trademark call-and-response vocals are barked with authority and conviction down to their last breath, and every word has resonance. A rare thing for an Irish record in 2012.

The album will be officially launched at Whelan’s, Dublin, on Saturday, August 25th, with special guests Elk and Guilty Optics. The launch will be followed by dates around Ireland in September.

Released through Out On a Limb on 24th August 2012. Available in all good record stores on LP w/ Digital Download or online from outonalimbrecords.bigcartel.com/product/jogging-take-courage-lp New Jogging album released on 12″ vinyl. Each copy comes with unique download code.

ALL PRE-ORDERS COME WITH FREE DOWNLOAD OF ‘MINUTES’, THE DEBUT ALBUM FROM JOGGING (RICHTER COLLECTIVE, 2010).

Drainolith returns to the US, joined by Lower Dens’ drummer‏