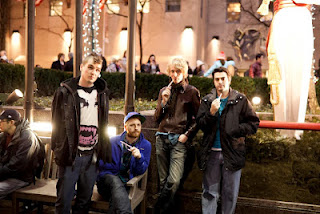 In support of their newly released album “Whistle Tips” out now on Ernest Jenning Record Co., New York-based infectious pop quartet Dinosaur Feathers have announced a month-long fall US tour alongside friends Shark?, as well as one-off dates with The Jesus and Mary Chain, Henry Clay People and more. 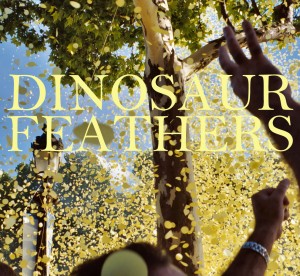 With Whistle Tips, Brooklyn quartet Dinosaur Feathers flee from the tropics of their debut, 2009’s Fantasy Memorial, and push themselves into hitherto unexplored and ultimately rewarding new territories. Once tethered to a drum machine, the addition of drummer Nick Brooks provides new-found forcefulness and flexibility; the clean melodic basslines of Ryan Michael Kiley often grow into dynamic leads without abandoning the low end; and where acoustic guitar once engendered laid-back vibes and folk misnomers, the electric guitar of vocalist Greg Sullo now drives with clear tones, a welcome crunch, and occasionally noisy outbursts. Evolution is, however, only a theory. For all you indie creationists, the Dinosaur Feathers you may have known and/or loved lives on through their sunny melodies, still-infectious grooves, and ever-boisterous harmonies between Sullo, Kiley, and keyboardist Derek Zimmerman. These elements, plus such seemingly disparate influences as The Soft Boys, The Olivia Tremor Control, XTC and of course Paul McCartney’s Wings, now inform a jazzier/punkier/maybe even poppier mélange.

From the instant bounce of “Young Bucks” and power popper “Untrue” to the impressively ambitious segued trilogy of “Certain Times”, “City Living”, and “Beatcha”, through the hints of prog riffing that open up “SURPRISE!”, this is a fully realized version of a band only hinted at in the past. While Dinosaur Feathers have existed in many incarnations: solo bedroom pop project, dance party karaoke machine, and tropical folkies, their boldest step has come with the transition to simply becoming a rock band.