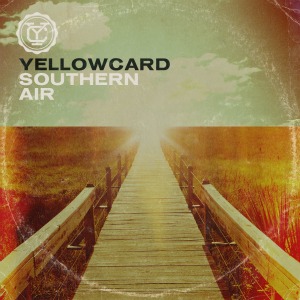 YELLOWCARD have just released a new lyric video to accompany the previously unheard track ‘Awakening’. This follows the music video for ‘Always Summer’ which was the first song to be released from the band’s forthcoming sixth album ‘Southern Air’ , due for release via Hopeless Records on August 13, 2012.

Once again featuring the crisp production of longtime producer Neal Avron, Southern Air is the sound of band who has not only returned to form but is expanding and growing in confidence with the help and support of the people who welcomed them with open arms – the fans. “This record has such an overwhelming sense of self awareness and positive energy that I credit completely to my ability to reconnect with my Southern roots,” Ryan explains. “The title, along with much of the lyrical content, takes me to Georgia State Highway 316, or A1A through Neptune Beach, FL, where I am driving with the windows down belting the words along to my favorite songs. I feel like a lot of the album is saying thank you to my family, friends, and fans, for supporting us all of these years.” Southern Air is the sound of a band who has found the voice and energy that fueled their fire from the beginning. “There is a sense of passion for these songs that we all share like never before,” Ryan concludes. “Each of us poured our hearts into this one entirely. The result is ten songs that we hope continue to inspire people around the globe as we all continue on this amazing journey together. Everyone needs to breathe some Southern Air from time to time.”

For all the latest Hopeless Records news, head to www.twitter.com/hopelessuk

Natasha North is set to release her second single ‘Fire’