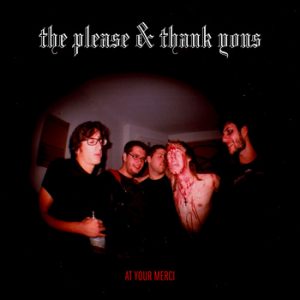 The Please & Thank Yous have returned with their new 9 track record ‘At Your Merci’- the much anticipated follow up to 2010’s ‘Mind Yr P’s & Q’s’. ‘At Your Merci’ is streaming in full below and available to ‘Name Your Price’ download via the bands’ bandcamp page.

At Your Merci Tracklisting

Released 13th July 2012
At the time of recording The Please & Thank Yous were:

Drums for At Your Merci were recorded by Kris DiBenedetto at the Summer Camp house in Chicago, IL on December 15th 2010 and May 27th 2011.

Everything else was recorded by Chris French at M.I.A. studios in Rockford, IL at random intervals in 2011-2012.

Mastered by Mark Gustafson at MIA studios in Rockford, IL in 2012.

Streaming in its entirety below-