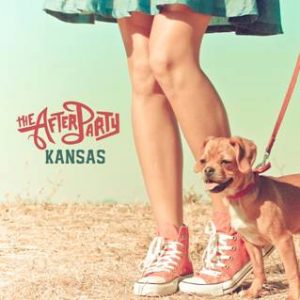 Kansas City pop rock act The After Party have released their new Kansas EP today via iTunes, where it’s currently positioned at #34 on the Pop chart. To purchase ‘Kansas’: http://itunes.apple.com/us/album/kansas/id539499149

A video for the first single, “Waste The Day” will be premiering later this month.

Following the band’s recent string of summer concerts at Six Flags parks across the country, The After Party will be celebrating the release of Kansas, with a series of release shows, the first of which will be streaming live tonight at 7pm cst on Stageit.com. To view the show live visit: http://www.stageit.com/the_after_party/kansas_ep_record_release_show/11081.

Formed in early 2010, The After Party swept through the underground music scene and quickly gained notoriety for their refreshing blend of pop, rock and something that listeners can’t quite put their fingers on. This versatile quartet traces its roots back to a small town in Kansas; a humble beginning for a band that has impacted so many lives worldwide through not only music, but also a personal connection with fans. The group’s debut EP, entitled “All The Wrong Places,” struck a chord with the music community and opened new opportunities such as increased radio time, a Hot Topic acoustic tour, and even an appearance on MTV television. It quickly became clear that The After Party is rarely in all the wrong places after all.

From there, The After Party recorded 2011’s Self-Titled sophomore EP with Zach Odom and Kenneth Mount. Singles such as ‘California’ and ‘Can’t Stop’ have captivated audiences and resonated with listeners all over the world. In the first quarter of 2012 The After Party hit the road again, embarking on several full U.S. and Canadian tours, supporting bands such as Allstar Weekend, Boyce Avenue, and Secondhand Serenade. The EP and the band’s passionate live performances showcased the group’s maturity and set the bar high for what was to come next.

After spending months on the road, the band returned to the studio to record their follow up EP, ‘Kansas’ released on July 10, 2012. New singles such as ‘She’s Gotta Boyfriend’ and ‘Here Comes The Rain’ are proof that The After Party has grown immensely as artists and have found the perfect combination of creativity and diversity in composing their own brand of timeless pop songs. The group’s charisma and vibrant musical style have brought their work to the foreground of the music industry. Through their dedication and devotion to the art of creating sound, these four young musicians are most definitely not in Kansas anymore.

Join TAP Nation for the latest news and info on The After Party: http://www.officialtapteam.com.