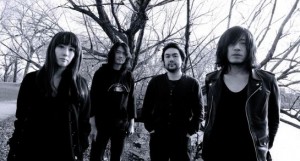 For My Parents is the new album by MONO, the Japanese instrumental rock quartet, who over the course of half a dozen albums, have followed their own muse and become what Pitchfork calls “one of the most distinctive bands of the 21st century.” Temporary Residence Ltd will release the record on the 3rd September, 2012.

Following the release of their previous album, the highly regarded Hymn To The Immortal Wind, MONO staged a series of sold-out concerts in New York City, Tokyo, London, and Melbourne, all backed by a massive chamber orchestra. Preparing for these unique performances afforded them not only the opportunity to retrofit their back catalogue, but also the inspiration to embrace their organic evolution as a pre-eminent neo classical noise juggernaut. There is no doubting a MONO song when you hear it, and no denying their uncanny ability to feel perfectly at home in both pristine symphony halls and dirty rock clubs. In the way that only MONO can, For My Parents obliterates that divide, showcasing a sensitivity and maturity that simultaneously acknowledges where they came from, and where they are going.

For My Parents is the first MONO album not to feature Steve Albini behind the console since 2003’s Walking Cloud and Deep Red Sky. The band chose to work with legendary New York producer, Henry Hirsch, recording in a converted cathedral overlooking the Hudson River, and mixing with long time friend, Fred Weaver in rural Pennsylvania.

Coming more than three years after Hymn To The Immortal Wind, For My Parents represents the longest span of time MONO has ever allowed between albums. As a result, the song writing is sharper, the dynamics are subtler, and the production is stunning. For the recording, the band once again enlisted The Wordless Music Orchestra for support, and the collaboration has never sounded stronger. The unique combination of soul-stirring melodies, cinematic East-meets-West arrangements, and firm command of elusive emotional intangibles.